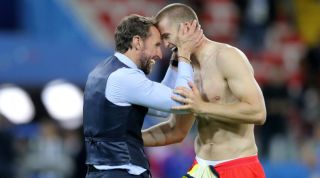 Following England's 2-0 World Cup quarter-final win over Sweden on Saturday, the Tottenham midfielder has revealed how Southgate and his backroom staff like to celebrate.

After all the wins in this year's remarkable World Cup run, Southgate & co play their own playlist full of their favourite "old-school" tracks on the team bus.

However, Dier is just a bit annoyed he can barely hear them at the back.

"I don't know if they're embarrassed about their music or the speakers are bad. It's quite hard to hear at the back of the bus," the 24-year-old told reporters on Monday.

"They don't put the volume up very loud - they try to keep the volume enough so that only they can hear it. But they like a lot of their... I call them karaoke tunes. Ones you can sing along to, old-school '80s and '90s.

"There are some good ones in there, the players enjoy listening to them too, they've had a few singalongs on the way back from games and hopefully that will continue on Wednesday."

We can only wonder if there is the Southgate version of Atomic Kitten's Whole Again on that majestic playlist - or whether it just misses the cut having been released in 2000.