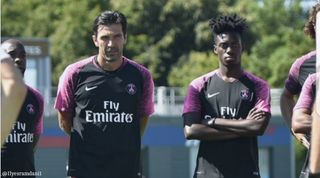 Back in 1995 when Buffon was a 17-year-old teenager establishing himself in top-flight professional football, he gloved up for Parma and made his first senior appearance against a Milan side containing the legendary striker Weah - who is now President of Liberia.

That was just the beginning of the journey for Buffon, while Weah's Milan went on to win the Scudetto in the 1995/96 season. Over two decades later and the 12-time Serie A goalkeeper of the year is now a PSG player.

Buffon was given a rapturous reception from the Ligue 1 champions' fans before his official unveiling on Monday.

Yet one mindblowing aspect of the new chapter in Buffon's storied career is he is training alongside Weah's son, Timothy.

The 18-year-old US international is now the one looking to make a lasting impression after three appearances for PSG's first team last season.