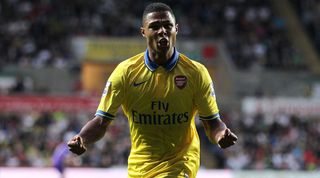 Snapped up two seasons ago shortly after his 16th birthday from hometown club Stuttgart (a deal had been agreed a year previously), Gnabry didn’t take long to stand out in Arsenal’s youth ranks. After announcing himself with a scorching dragback-inspired 25-yard strike against Crystal Palace’s helpless kids (below), the prodigious German made a seamless transition to the reserves within half a season and never looked back. By the following campaign he’d represented Arsene Wenger’s first team in the League Cup, Premier League and Champions League, and bagged his first goal for the Gunners against Swansea.

The exciting hopeful has represented Germany’s youth ranks from U16 through to U19 level, too. No surprise, then, that a new long-term contract was announced on Monday.

It’s only a matter of time before Gnabry becomes a first-team regular at Arsenal. He’s already proved a capable go-to man off the bench for Wenger with injuries to Theo Walcott and Alex Oxlade-Chamberlain, and it was his trickery that won the Gunners’ first-half penalty in their 2-0 win at Crystal Palace on Saturday.

"We have some other boys who have the technical quality to play in the Premier League but are not resistant enough yet to compete physically,” Wenger admitted last month, “but Gnabry has that."

Under the Frenchman’s tutelage he’ll be given the opportunities and discipline that will allow him to shine. He’s already featured in the league three times this season.

Gnabry is fast gaining a reputation for his explosive right-foot shot – just ask France’s under-18s, among the many teams to have felt the young German’s wrath. With pace to burn, confidence in abundance and a box of tricks that’d make David Blaine blush, there’s a whole lot to like where Arsenal fans are concerned. Though right-footed and used on his most natural side by Wenger, the youngster has proved effective cutting in from the left with a licence to shoot.

Early niggles about Gnabry’s temperament have proved shortlived – the teenager has taken on board advice from Arsenal’s coaches and impressed Wenger enough to earn his first-team stripes. Nonetheless, the youngster now has the hardest job ahead as he bids to ignore his own hype. The club’s experienced German core – namely Per Mertesacker, Lukas Podolski and Mesut Ozil – can only help with that. Unsurprisingly Gnabry isn’t known for his defensive attributes, another facet of his game he’ll be looking to refine in the unforgiving first-team environment.

"He's got so much potential and ability, and he can finish as well," team-mate Mikel Arteta told FFT. "He's like a little beast because he's so small but powerful. Now it's up to him how much he wants it, how much he wants to work and how strong he is mentally to deal with decisions that might be hard to take. But it's for sure that Arsenal will give him the opportunities to show what he can do."

An even younger Gnabry might have chosen an alternative pursuit in athletics. The multi-talented Gunner was a champion sprinter in his formative years in Germany, where he “never lost a race”. Fortunately he chose football, where he “had the most fun”.

The sky’s the limit. While he’ll inevitably fall down the pecking order once Theo Walcott returns from injury, Gnabry can now be considered a genuine contender for a first-team spot this season. More of the same off the bench with some impressive displays in cup competitions could leave Walcott staring nervously over his shoulder. Going forward he’ll fancy a crack at Germany’s national team, but for now he’s in no better place to continue his development. Whatever happens, Arsenal fans can get used to him.