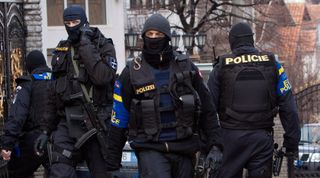 Hundreds of fully-equipped police officers were surrounding the Partizan Stadium, home of Belgrade's black and white. They looked like soldiers - with balaclavas and their helmets on, heavy weapons on set, fingers on the trigger. Prepared for anything and everything.

But this was supposed to be a familiar sight here. The policemen in Belgrade are well experienced. At least twice a year these forces, at their full strength, are on this very same street - one on which the city's other major stadium, Marakana, is also situated - to protect the peace. Or at least try. The Belgrade Derby, between the two biggest Serbian clubs, Partizan and Red Star, is one of the fiercest in the world. The bitter rivalry is packed with violence and bloody clashes between the infamous Delije and Grobari.

However, the derby isn't scheduled until next Sunday; this is the international break. The police were there for a different reason. The Albanians are in town. Tonight Serbia hosts them in the Euro 2016 qualifiers.

"This operation is bigger than the Eternal Derby," explains Nikola Popovac, Belgrade's deputy chief of police. "More than 3,500 police officers have been engaged in this operation. We'll have a double check with metal detectors, and will react to any troubles in the stands. Also, the prosecutor and the judge will be on duty at the stadium and expressly prosecute anyone who will eventually be arrested. We are ready for everything."

For the Albanian national team this is a first visit to Belgrade since 1967, when Yugoslavia easily defeated them 4-0. Since then a lot has changed. Yugoslavia disintegrated in the bloody war of the nineties, with hundreds of thousands of lives being sacrificed. It split into six different countries - and Kosovo.

Barely 4,212 square miles of territory situated to the south of Serbia and northeast of Albania is the subject of a centuries-old dispute. It took today's shape as an autonomous province under Serbian control in post-Second World War Yugoslavia, with the Albanians constituting a majority in Kosovo since the 19th century.

In the 1980s, the death of Marshal Josip Broz Tito, who ruled the country since the Second World War, sparked the beginning of ethnic tensions. While Slovenia, Croatia, Bosnia and Macedonia were heading towards independence, but also brutal war, the Albanian community in Kosovo began the same battle.

Their desire for more autonomy from Serbia led to the war for independence which ended in 1999 after two years of devastating conflict and NATO's bombing of Serbia.

The United Nations took over the administration of Kosovo for the next nine years, before the local government consisting of Albanians decided to declare independence.

In February 2008, despite protests from Serbia, Russia and others in the UN, Kosovo was recognised by the United States: as of 13 August 2014, 108 UN states had followed them. However, the country with an estimated population of 1.8 million, the majority of them Albanian, is stuck in limbo. Still not being recognised by the United Nations, it's the country that isn’t.

This means that the Kosovo national team, formed as soon as the independence was declared, can’t play official matches and has to satisfy itself with friendlies. The Kosovan Albanians obviously turned to Shqiponjat - the Eagles - as the Albanian national team is nicknamed. After the Euro 2016 qualifiers pitted them in a group with Serbia, the hype began to rise.

The Kosovars, together with Albanians from the diaspora but the motherland as well, began to plan their trip to Belgrade. The Albanian FA asked for 2,000 tickets. The Serbs, however, responded with a request that all ticket holders should be listed by name and prove Albanian citizenship with their passports.

This dispute between the two federations ended with UEFA’s suggestion that away fans should be banned from the stadiums in this game, as well as the rematch in Albania. However, as matchday approached, the visiting fans announced that "they’ll do everything to get to Belgrade", with a photo of three buses packed with fans leaving for Serbia being published in media. What's more, on Tuesday morning, photographs of the fans wearing Albanian colours in Belgrade appeared on social networks.

"The supporters of Albania are not allowed to visit the stadium," explains Milivoj Mirkov, head of security for the Serbian Football Federation. "UEFA banned away supporters from this as well as the rematch that will be played in October 2015 due to security reasons. Every Albanian supporter that tries to attend the match will be arrested and prosecuted."

On the other hand, the Serbian tabloids have not hesitated to add oil to the fire. Seven players from the Albanian team were born in Kosovo, including captain and former Sunderland midfielder Lorik Cana, and obviously this is a huge match for them as well as the hosts.

"If any other country apart from our neighbours was visiting today, the stadium would be half-empty," explains one Serbia fan. "But a match like this attracts people who love to heal their frustrations on the stands. It’s a sort of Balkan mentality."

Interestingly, this is similar to a comment made by Manchester City’s Aleksandar Kolarov after Serbia dropped two points against Armenia this week and were heavily criticised by the fans. "It seems that some of the fans are just waiting for our loss to attack us," quipped the left-back. "We’ve never had a real support among the people. I really don’t know why."

The police officers are still around the stadium with their fingers on the triggers. This is another football match in the Balkans that's way more than just a game.