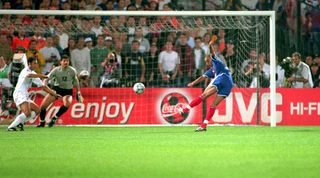 Two points for a home win, three for an away win

In 1981 the English Football League became the first in the world to introduce three points for a win rather than the traditional two. A change spearheaded by Jimmy Hill; it was hoped the change would encourage teams to take a more attacking approach with a greater reward on offer for wins.

By 1983, however, the recently formed Alliance Premier League - or the National League, as it's known today - changed the rules so that teams earned two points for a home win and three points for an away victory.

Theorising it would encourage teams to chase more wins on the road and make for a more entertaining spectacle, the next few years saw the APL defy the old football adage that the “table never lies” – Bath City, for example, would have won the 1984/85 title under the three-point system but instead finished fourth.

Unconvinced by the merits of the system, the experiment was scrapped for the 86/87 campaign.

No offside from free-kicks

Undeterred by the failure of their “two points for a home win, three points for an away win” revamp, the powers that be in the Football Conference came up with another innovative way to encourage attacking play for the 1987/88 season.

Concerned by a lack of goals in the division – Scarborough had won the title the season prior despite scoring just 64 goals in 42 games – a change in the division’s rules meant no player could be directly offside from a free-kick.

What seemed a good idea on paper proved chaotic in practice with almost all ensuing free kicks resulting in a melee of players swarming around the defending team’s goal as the ball was launched into the area. The renewed focus on route one tactics made for a terrible spectacle and the change was scrapped after just a few weeks.

In a bid to cater to their US audience, the organisers of the North American Soccer League hit upon a novel idea ahead of the 1977 campaign: any game tied at full-time would go into a period of sudden-death extra time.

After 30 goalless minutes, the game then moved on to a unique variant of the penalty shootout which saw players start with the ball, 35 yards from goal, and given just five seconds to score.

Taking inspiration from the NHL penalty shoot-out, the system was supposed to offer a fairer alternative to the European standard but often resulted in badly skewed or downright poor efforts with some players struggling under the pressure of the five-second rule.

Though it disappeared with the dissolution of the NASL in 1982, the concept made a comeback with the advent of MLS in 1996 but was eventually ditched for good in 1999.

In 2000, Premier League referees were handed the ability to penalise defending teams by moving freekicks forward 10 yards in instances of dissent. Viewed as an effective way to curb antics like kicking the ball away, the rule was already in place in rugby and had proven effective during a trial in the Auto Windscreens Trophy.

While the change resulted in an initial reduction in the amount of dissent, Premier League teams soon wised up resulting in instances where defending teams facing free kicks in dangerous areas would deliberately rail against a decision knowing the ball would be moved closer to goal.

This, in turn, would make it trickier for the attackers to get the ball up and over the wall from a closer range. The fact dissenting players were also booked also added extra heft to the level of punishment. Ultimately FIFA scrapped the rule change in 2005.

Kick-ins instead of throw-ins

English non-league football once again proved the testing ground for another ill-conceived concept in the 1994/95 campaign when FIFA invited the Diadora League – essentially the Conference South – to trial a new initiative that saw kick-ins replace throw-ins.

Previously tested out in the 1993 World Youth Cup, the system was designed to bolster the natural flow of the game with teams able to opt for initiate quick-fire kick-ins rather than throw-ins, provided they raised their arms first.

Alas, it ended up having the opposite effect with many teams using it in much the same way they would a free-kick to launch long balls upfield rather than any slick counter-attacking moves. It was also vehemently opposed by some managers with St Albans City boss Allan Cockram famously threatening to fire any player who attempted a kick-in. After just one season, it was shelved.

Implemented by FIFA back in 1993, the Golden Goal rule was essentially football’s equivalent of sudden death in NHL with any score during the 30-minute extra time period ending the game with immediate effect.

The game’s governing body argued the change would serve as an incentive to teams to attack more, knowing that any goal would ensure they avoided the dreaded penalty shootout.

Yet it proved the opposite with teams taking an increasingly cautious approach to extra time, knowing the slightest mistake could prove fatal. Where once the period served as a continuation of a thrilling contest it now became one in which much of the game slowed down to a snail-like pace with fans left praying for penalties. It was ditched in 2002.

Eager to improve on the concept of the Golden Goal, 2003 saw UEFA implement the slightly less impressive-sounding Silver Goal.

Once again designed as a means of reducing the likelihood of a penalty shootout, the silver goal rule meant that in the event of a team scoring in the first half of extra time, the opposing side had until half time in extra time to equalise. If they didn’t, the scoring team would be winners.

Apparently created in response to the criticism of some who felt the Golden Goal rule created an unfair level of risk and, in turn, discouraged attacking play, the change made little difference to the way teams approached extra time.

Worse still, the change resulted in one of the biggest injustices in football history when underdogs Greece eliminated team-of-the-tournament Czech Republic in the semi-finals of Euro 2004. It was ditched soon after.

NEW ISSUE Check out our new issue, a Euro '96 special