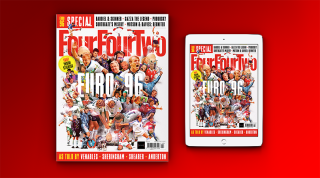 First a note from our editor, James Andrew...

The first time I picked up a copy of FourFourTwo, I was a 10-year-old boy way back in September 1994. On the front cover of that very first issue was then-England manager Terry Venables.

So it’s somewhat fitting that as I write my first letter as Editor, 26 years and 308 issues later, it’s Venables and his England team from 1996 that feature prominently in this issue – and on our cover.

That summer was the last time football came home. Now it’s coming back, with Wembley hosting seven Euro 2020 games. England will play in at least three of them – fingers crossed, it’ll be five.

In these pages we celebrate Euro 96, taking a day-by-day look back at one of the most memorable tournaments in the competition’s 60-year history. We also meet England’s Darren Anderton to ask him your questions, and comedian David Baddiel discusses the Fantasy Football phenomenon.

Karel Poborsky tells us about how the finals put him and the Czech Republic on the map – as well as his near-death experience 20 years later – while legendary commentators John Motson and Barry Davies dissect their ‘rivalry’ in the same room. And there’s plenty more where that came from...

After four years of misery, England faced up to Euro 96 with bleak hopes of enjoying their own party. Three weeks later, they emerged as heroic losers who’d changed a nation. FFT relives all the drama...

In 1994, David Baddiel and Frank Skinner launched a TV show which quickly outgrew its name and later spawned English football’s greatest anthem. We discover some of the bonkers inside stories.

Between The Lines: Karel Poborsky

Karel Poborsky became world famous following his revolutionary chip for the Czech Republic at Euro 96. Almost exactly 20 years later, he was a day away from death. He tells us his amazing story.

The history of Panini

Panini stickers have swept school playgrounds and excitable offices for several decades – but how did it all really begin? We chart the highs and lows of a global phenomenon. Got, got, need…

Gareth Southgate made the long walk from halfway with England’s Euro 96 semi-final hopes in his hands – then watched in horror as it all went terribly wrong. What followed meant his life was never the same again, featuring media hounding, mad ads… and even some stick from his mum.

You Ask The Questions: Darren Anderton

The former Portsmouth, Tottenham and England midfielder answers your posers about hitting the woodwork in the Euro 96 semi-final, being held hostage by Alan Sugar, and his infamous nickname.

Peter Crouch reveals why baked beans are the secret to success, Pierluigi Casiraghi opens up on his love of English football, Igor Stimac says he’s still bitter about Croatia’s Euro 96 defeat to Germany, and Craig Burley discusses the days when Chelsea couldn’t even afford to pay the local kebab shop.

The gear we love this month, including Japan’s groovy new home strip and some throwback kicks.