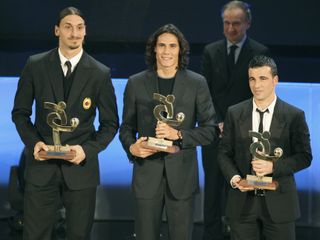 1) Can Ibrahimovic and Cavani be Ligue 1's Lennon and McCartney?

Arguably the main question in Ligue 1 this season will be: can Edinson Cavani and Zlatan Ibrahimovic play together successfully? And if so, should anyone else in Ligue 1 even bother turning up?

Much idle tactical pondering has taken place since PSG forked out €64m to prise Cavani from Naples, but how the champions will line up has since been made clear.

"When you have two strikers called Cavani and Ibrahimovic, you play in a 4-4-2," Laurent Blanc said in Gothenburg ahead of a friendly against Real Madrid, playing his hand with commendable candour.

It could feasibly work very nicely. Cavani is more of a penalty box player. He receives the ball in central and wide areas, lays it off and does most of his best work in and around the box.

By contrast, Ibrahimovic gets much more involved in general build-up play. The Swede averaged twice as many passes per game than his new teammate last season and loves dropping deep to stamp his authority on the game.

For such a prolific striker, the extent to which Ibra occupies deeper positions is extraordinary. Highlighted are two games in which he received the ball as much, if not more in his own half than he did in the opponent's box...

No longer will Ibrahimovic be the sole totem pole around which PSG build attacks. He'll need to adjust slightly, as will the champions' midfield, who will likely find themselves more stretched in central areas.

It is stunning that a team could finish second in Ligue 1 after scoring so few goals. Marseille managed just 42 last season, one fewer than relegated Troyes and only the 14th highest tally in the league. instead, they were reliant on unflinching organisation and a defence led by the excellent Nicolas N'Koulou.

In Dimitri Payet, Gianelli Imbula and Saber Khelifa, manager Elie Baup has signed a trio of talents certain to boost OM's artistry and firepower. Payet's arrival from Lille is particularly significant, as it means Marseille now boast last season's two most creative players in their squad.

Payet and Mathieu Valbuena both managed 12 assists in 2012/13, while Khelifa was one of Ligue 1's top 10 scorers and is capable of the outer-worldly, as this goal of the season winner demonstrates.

Of Réunionese descent, Payet was a potent weapon for Lille. Ibrahimovic aside no player attempted more shots on goal than the 26-year-old and the sight of him cutting infield from either left or right flank had opposing managers' hearts skipping beats with alarming frequency.

Throw in the Ayew brothers and Andre Pierre Gignac and Marseille have genuinely exciting options in forward areas. If they can add attacking verve to their remarkable resilience, Marseille could well challenge the millionaires of Monaco and PSG.

3) Will Casanova continue to love his 3-5-2 formation?

Toulouse manager Alain Casanova is often disregarded as a Luddite intent on sucking the life out of football. A grinch who likes nothing more than a good old physical tussle and doesn't mind one bit if the scoresheet resembles a one-sides game of noughts and crosses.

This characterisation is actually hugely unfair on Casanova, a thoughtful manager with a wealth of football knowledge whose pragmatism is derived at least in part from Toulouse's meagre resources.

Last season, TFC were in the midst of a nightmare run of two wins in 14 games when, out of nowhere, Casanova had an epiphany. Out went his trademark defensive 4-5-1, and in came a modern adaptation of a 3-5-2.

In their very next game, Toulouse beat Lille 4-2, with now-Roma coach Rudi Garcia admitting afterwards that he was stunned by the change in formation. Toulouse won three of their final four games using this system and will stick with it this season.

The change was inspired by Italian champions Juventus. "I've studied Juve's system and it's one which really impresses me," Casanova said in pre-season. "It corresponds exactly to what I've had in my head for a while."

Eden Ben Basat's frankly ridiculous shots to goal ratio (2.2) made the Israeli one of Europe's most clinical strikers last season, and with the wily Wissam Ben Yedder in support, Toulouse should be far more interesting to watch, if only to see how it all pans out.

4) Will we still be bored o' Bordeaux?

Bordeaux are another side who struggled for goals last term. Their tally of 40 was even more pitiful than Marseille's, putting the French Cup winners towards the bottom of the table for goals scored (16th) despite a seventh place finish. So boring were they that at times it made watching paint dry seem like a sensory experience akin to a scene from a Hunter S. Thompson book.

In the months up to and including a 1-0 defeat to Marseille in April, les Girondins managed just three goals from 109 shots in Ligue 1, a pathetic number, even if it was explained in part by losing Yoan Gouffran to Newcastle in January.

To make matters worse, Bordeaux lost their most creative (and arguably best) player this summer, with Benoit Tremoulinas leaving for Dynamo Kiev. The French left-back was hugely influential at Stade Chaban-Delmas. He was an academy graduate who contributed to the league title win of 2008/9 and whose importance to the team multiplied as the years went by.

The net result of Tremoulinas' penetrative overlapping runs and superb delivery was that Bordeaux's attacks became disproportionately focused down the left in the last two years. His influence was demonstrated perfectly in a 4-2 win over Montpellier, one of his best games of last season.

Lucas Orban and youngster Maxime Poundje (who looked good in the Trophee des Champions defeat to PSG) will share the burden of replacing Trech, as he was known in the dressing room, but his loss only further weakens Bordeaux as an attacking force. Much will be expected of Cheick Diabate and Diego Rolan. After all, having to rely on David Bellion is a risky business.

5) Will the rapid rise of Clement Grenier continue?

Blaming Yoann Gourcuff may not be a novel concept in French football, but it certainly is popular. Nice certainly have reason to point the finger - were it not for the former Bordeaux pin-up boy's fragile body, one of France's hottest prospects would almost certainly be plying his trade in the red and black of les Aiglons.

Clement Grenier was all set to join Nice last August as part of a swap deal for Fabian Monzon. He and Jeremy Pied were to move south in a deal that looked a ludicrously bad deal for Lyon. But days before all parties put pen to paper, Gourcuff suffered an injury in the 12th minute of a 4-1 win against Troyes. Lyon needed an attacking midfielder as cover so Grenier stayed. The rest is history. Grenier has improved rapidly at OL ever since and was a revelation in the final quarter of last season. He started to do things like this...

As is the norm in these situations (a young French player doing quite well), Arsene Wenger started to sniff around, only for Grenier to commit himself to Lyon by signing a three-year contract extension in July.

Grenier is far from the finished article, but at 22 his pleasing skill, craft and imagination set him apart as an emerging leader of Remi Garde's rapidly evolving Lyon side. With Lisandro Lopez and Anthony Martial gone and Bafetimbi Gomis persona non gratis pending a possible move to Newcastle, how Grenier develops could hold the key to Lyon's season.

Don't forget that Ligue 1 is covered LIVE by Stats Zone, now available online or as an iPhone/iPad app. Details at http://fourfourtwo.com/statszone/