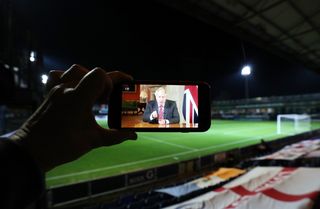 The Football League faces the greatest existential crisis of its 132-year history. The biggest issue of this season is not promotion or relegation, but if it still has 72 members in May. Overpaid players, transfer-market mistakes, poor owners and bad business practices may be contributory factors at certain clubs, but the removal of the majority of the game’s income stream is the threat to the survival of historic institutions.

The Football League needs a bailout. The governmental decree that there are no fans – and it is easy to point out the inconsistencies between what people are and are not permitted to do – means that, despite their innate tendency to try and offload responsibility on to someone else, it is up to them. They can try and create a world where the Premier League will do that but while the rich ought to do more, that ignores the reality that the top flight faces losses of £100 million a month in a world without crowds. And, at the risk of repetition, the ban on supporters comes from government, not the Premier League.

There are entire industries, and football is one, facing destruction without intervention. And while the political left has tended to be keener on state intervention, historically conservatives have wanted to preserve. Principles have been warped over the years, from an uncaring strand of social Darwinism to the gleeful vandalism some right-wingers exhibit now. Yet if they can be accused of venal self-interest, it should be in their interests to ensure Football League clubs survive.

The Premier League can seem a triumph of capitalism, but big cities tend to vote Labour and elite clubs tend to be found in big cities. It used to be the case that Stamford Bridge was the only top-flight ground in a constituency with a Conservative MP. That has changed, but it is the Football League that more reflects the political tide that gave Boris Johnson an 80-seat majority in the House of Commons.

It was the towns who felt left behind and who backed Brexit where traditional Labour voters switched to the Conservatives. Labour’s ‘Red Wall’ was knocked down in the midlands and the north, changing the political map. Now those Red Wall clubs, with the odd notable exception like Burnley, West Bromwich Albion and Wolves, are found in the Football League and the National League.

Consider those either in Red Wall seats or sufficiently near to draw a substantial number of their supporters from them: Accrington, Barrow, Blackpool, Bolton, Crewe, Doncaster, Fleetwood, Grimsby, Mansfield, Middlesbrough, Port Vale, Rotherham, Scunthorpe, Stoke, Walsall, Wigan. None is in a wealthy area but if not all are on the list of the most endangered, few are safe in exceptional times and it is worth noting that Bury, whose two marginal constituencies both elected Conservative MPs last year, has lost its club.

A theme of the government’s, before COVID-19 dominated the agenda, was “levelling up”: ensuring those towns were no longer left behind, helping them financially and ensuring that the new supporters’ loyalty was retained. Football clubs are one of the few things that bind those communities together; beyond the economic damage of their disappearance would be a huge societal cost.

The government does not just have a moral imperative to ensure they all survive. They have a motivation in ensuring their new MPs are electable again. Because if they do not support the Football League, and if Red Wall clubs go to the wall, it could be a disastrous legacy of Johnson’s administration.

LONG READ Will Liverpool equal Manchester United's title record this season? What life is like back on the perch