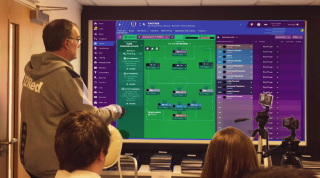 You’ve been unveiled at the ground holding a scarf above your head. You’ve posed for photos with the chairman and been asked the awkward questions about that one player who appears to be running his contract down. Now what?

The first and most important chore of any budding football manager is to bring your philosophy to life. Football Manager 2020 has a range of set templates and styles but trying to find a healthy balance between them can be like, well, trying to manage a squad of egos and prima donnas.

Think of us as the Queiroz to your Fergie; the hard-thinking Steve Holland to your decision-making Gaz Southgate. We’ve got some tactical set-ups ready for you to implement, boss.

If holding onto the ball is your jam, then a 4-3-3 is often the formation to go with. With this 4-2-3-1 though, similar to the one that Mikel Arteta operates at Arsenal, you can be positive enough going forward while not catching your team out too much on the break.

With this particular style, the left-back pushes high and the left-winger tucks in. Look for a striker who lends himself well to holding the ball up and make sure that your No.10 is capable of linking the midfield to the attack. A box-to-box midfielder ensures too that you have plenty of energy in all phases.

4-1-4-1: For idealists and champagne football

The 4-1-4-1 - or 4-3-3 - is the formation of choice when it comes to pretty passing triangles and vertical passing. This is perhaps the style of midfield that Maurizio Sarri would opt for: a Jorginho-style regista at the base for distribution, with two central midfielders ahead - one more complete in style, with the other supporting the attacking play more.

This particular style opts for an advanced playmaker out right with the right-back overlapping. Goals need to come from your inside forward on the left, given that there’s a false nine up top. This is a formation that will produce liquid football, but you’re going to need some world class players across the pitch to make it work.

Marcelo Bielsa is one of the most influential coaches of all time, his ideals having rubbed off on the likes of Guardiola and Mauricio Pochettino. If you too want to ball like El Loco, then a 3-3-3-1 - just like the master uses - is your formation of choice.

This particular iteration of the formation essentially splits the pitch into six defenders and four attackers. Inverting the wing-backs is the best way to retain possession in this shape but you can leave them to bomb on if you’re looking to counter attack your opponents.

The 4-1-2-1-2 - or diamond 4-4-2, if you prefer - isn’t all that popular in the real world. It’s a good option if you don’t have natural width in your team though: Real Madrid evolved into this shape during Zinedine Zidane’s first spell as coach, utlising Crisitano Ronaldo and Karim Benzema in the front two, while Pochettino opted for this shape on occasion when he was at Tottenham Hotspur.

In Football Manager though, a narrow diamond is an excellent gegenpressing formation. If you have a supremely fit squad - particularly a No.10 who can chase down defences and make a clinical run beyond the strikers - this shape is excellent for forcing opposition defences into errors, and it forces them to play out to the flanks.

Antonio Conte is the master of this tactic. Both his Chelsea and Inter Milan sides have been ferocious forces going forward, without compromising any kind of defensive stability. A three-at-the-back formation certainly helps with that.

This particular version of the 3-4-1-2 is particularly attack-minded, offering a No.10 behind a target man and complete forward: think of this as a Hazard behind Lautaro Martinez and Romelu Lukaku. The two wingers can get back to defend when they’re not whipping balls into the frontmen, and notice the two ball-winners in the middle. It’s cruel to be this destructive.

Perhaps going for the jugular isn’t your style. If you’re more “park the bus” than “bus loads of forwards”, this 4-4-1-1 is a Simeone-style defensive tactic perfect for bringing the best out of your bunch.

Here, the attacking impetus out wide isn’t on the full-backs but the two wingers, with a Griezmann-like shadow striker sitting behind a Diego Costa-esque deep-lying forward. Your midfield double-pivot consists of a box-to-box midfielder and standard CM: so whether you’re looking to hold onto a lead or recreate the template that won Leicester City the league, the choice is yours.