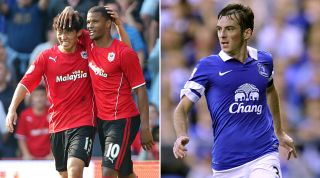 High-flying Bluebirds (playing in red) against the new-look Blues (who’ll still be in blue).

Rusty on the road in the season opener at West Ham, Cardiff know their home form will be key to their hopes of dodging the drop in their first top-flight campaign since 1961/62.

Malky Mackay's side won their first 10 games on their own patch last term, and while a repeat is surely beyond them at this level, a second victory in six days against one of the Premier League’s most established sides will see their confidence soar higher than Tan’s waistband.

Visitors Everton have played some tidy football under new gaffer Roberto Martinez, but two draws against Norwich and West Brom, followed by an underwhelming Capital One Cup win over Stevenage, hardly represents a sizzling start for the Spaniard.

Nevertheless, with Manchester United yet to up their £28m bid for Marouane Fellaini and Leighton Baines, and teenage midfielder Ross Barkley enjoying a fine start to the campaign (this week Martinez compared him to a “young Michael Ballack”), the Toffees have reasons to stay positive going into Saturday’s game.

Cardiff striker Andreas Cornelius is a major doubt after hobbling off in the Bluebirds' Capital One Cup win at Accrington Stanley on Wednesday. The giant Dane has struggled with an ankle injury since his £8m summer switch from Copenhagen, although he won’t be missed too much if last weekend’s hero can continue his scoring form…

For Everton, midfielder Darron Gibson could feature for the first time this season having recovered from a knee injury, although centre-back Antolin Alcaraz, a summer arrival from Wigan, is still out following a hernia operation.

Boss Mackay spent £28m over the summer, but it was his £650,000 man who did the damage to Manchester City’s backline, with Joleon Lescott and Javi Garcia unable to handle the two-goal striker.

“He’s worth multi-millions," purred Mackay of the ex-Manchester United striker, who just 18 months ago was lining up for England against Holland. “We got him at a fantastic price from Sunderland and if he keeps playing like that there's a chance he could be considered for international duty again."

It’s the first meeting between the two, although that’s something Mackay will soon get used to as he settles into life alongside English football’s elite. They're both likeable and level-headed, so don’t expect any touchline face-offs or handshake shunning come Saturday afternoon.

The Toffees to become the latest big-club casualty at the Cardiff City Stadium. 2-1.