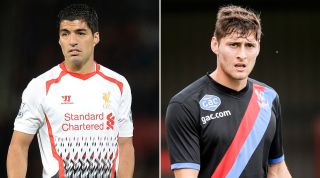 Murder on Merseyside. Killing in front of the Kop. Anfield Annihilation. Eagle cull.

Ian Holloway’s men would be forgiven for approaching this weekend with a little trepidation. Daniel Sturridge and Luis Suarez, reunited after the latter’s dental-based absence, have picked up where they left off. The combination of skill, pace and lethal finishing that comes from the Liverpool frontline has many reassessing their summer predictions for the red half of Merseyside.

For Crystal Palace, there hasn’t been much to cheer so far this season. Solid displays, if unspectacular, have seen them edged out of games rather than getting completely pumped. We have a feeling that this could be the first pumping of the season.

The Eagles endured a torrid time the last time they travelled to the north west. Manchester United did a good impression of a cat with a trapped mouse as they enjoyed 60.4% possession and managed 20 shots to Palace’s four. That would be the same Man United who were beaten two weeks earlier by… Liverpool.

While it’s already been shown this season that the form book is flawed, Brendan Rodgers must be seeing this is an opportunity to get the Kop purring. Anything less than a couple of goals and a clean sheet will be a bit of a let-down. Let’s be honest,  Suarez vs Danny Gabbidon has the air of a mismatch about it. God bless you, Julian Speroni, God bless you.

Liverpool will be missing Lucas Leiva thanks to a one-match suspension after the Brazilian picked up his fifth booking of the season already. Impressive.

That could be the Scousers’ biggest challenge in this game as there isn’t an obvious replacement in their squad who provides a similar level of bite. Jordan Henderson is most likely to move inside to play alongside Steven Gerrard.

Palace’s request to give their team bus a shirt number and drive it onto the pitch have been denied. Seriously, though, the Eagles don’t have any fresh injury or suspension problems.

The Welshman will need to have an epic day at the office to have any chance of keeping up with Suarez. The two screens compare Gabbidon’s performance at Old Trafford against Suarez’s' against Southampton.

To describe Suarez as “busy” (obviously not using the Scouse definition) would be an understatement. The main focus for Liverpool’s opposition needs to be communication. Proper chit-chat will prevent Gabbidon going AWOL trying to mark Suarez and allow Palace to keep their shape. If that shape is lost, then so is the day.

The bright spot from these screens is how clinical Gabbidon is when he’s called into action. Everything defensive he tried in and around the box came off. He’ll need to maintain that consistency if he wants to avoid drawing penalties and free-kicks from the ever-mobile Suarez.

It’s tough to imagine two more different team talks occurring at 2.45pm. Holloway will do his darndest to gee up his team, giving that extra five or 10% they’ll need to afford them the best chance of disrupting Liverpool’s attacking play. Rodgers just needs his team to focus and do what they do… “keep a lid on it Luis and we’ll be OK”.

Holloway has felt hard done by on a couple of occasions this season when it comes to refereeing decisions. Here’s hoping that he (and the rest of us, for that matter) get to see Anakin Suarez rather than Darth Suarez this weekend.

If Palace can keep it tidy for the first 30 minutes or so, a low-scoring loss could be on the cards. Concede earlier and it could be a hatful for Liverpool. 3-0.