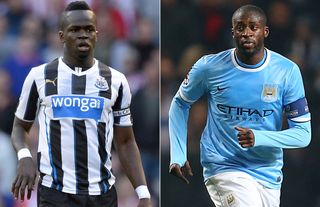 The Toon and the City.

Are Newcastle on the wane? Three consecutive losses of varying stripe - unsuccessfully astute against Arsenal, somewhat unlucky at West Brom, certainly disappointing against Cardiff - suggest it's a possibility. They haven't lost four on the bounce for almost exactly a year, culminating in last season's FA Cup Third Round disappointment at Brighton.

They could therefore do without a visit from goal miners Manchester City. A couple of months ago Manuel Pellegrini's side were more suspect on their travels than a late-70s Radio 1 Roadshow; they now seem as happy scoring away as they do at home (18 in their last seven trips), even if they do tend to allow their hosts a goal or two to make things interesting.

Recent history between the sides doesn't bode well for the Mags. They haven't beaten City in 15 attempts, have lost the last nine, and didn't even score in the three clashes during 2013. The last City side beaten by Newcastle included Antoine Sibierski and Kiki Musampa.

However, at least Newcastle can now truly concentrate on the league, whereas their visitors are still fighting on four fronts – with domestic cup commitments testing the depth of Pellegrini's squad. Among the tyros untried against West Ham whom Pellegrini may have to rotate in are Joe Hart, Fernandinho and David Silva. Tough times.

When Yaya Toure went over on his ankle in the West Ham demolition, every City fan winced - then cheered as he bounced back up and scored. Still, the Ivorian will be monitored for damage.

Jesus Navas may be back from knee-knack, but Micah Richards and Stefan Jovetic (hamstrings) are both at the stepping-up-training stage - with Sergio Aguero hoping to join them soon as City continue to fight on four fronts.

Newcastle have an easier fixture list but a shallower squad. It will be much harder for them to replace Tim Krul (shoulder), Fabricio Coloccini (knee), Mathieu Debuchy (suspension) or Yohan Cabaye (calf).

The keeper is likeliest to feature, with Cabaye more a hope than a possibility and Coloccini out for the month.

The Ivorian will already be expected to hold out against City's midfield creators, whether the guile of Samir Nasri and David Silva or the strength of his compatriot Yaya Toure; should Cabaye fail his fitness test, he will also have more creative responsibility. It's not something he shirks: at West Brom Tiote's pass stats were second only to Cabaye – and against Arsenal he outpassed all others.

Alan Pardew was Pellegrini's first managerial opponent in English football, seen off 4-0 at the Etihad in August. Two months later in the League Cup City's reserves won 2-0 at St James' Park, but only after extra time and three strengthening substitutions.

After all but matching Arsene Wenger's Arsenal in their last home league game, Pardew will relish another chance to pit wits against a big name in a game he won't be expected to win - but Pellegrini will also be quietly, and understandably, confident.

Although it would be far from stunning if cup-tired City slip at the eighth-placed team, you have to imagine their squad would have enough against a weakened Newcastle. 3-1 City.