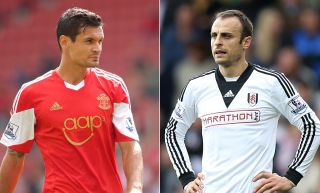 The game with the misfortune of being up against El Clasico (and You've Been Framed) in Saturday's early-evening ratings battle.

On the face of it, this may not appear one of the weekend’s more enticing fixtures, yet it could prove an interesting clash of managerial approaches.

Southampton are in sterling form, despite dropping two points at Old Trafford that saw them slip down as low as sixth in the table. Fulham, meanwhile, looked a team revitalised in their Monday evening win at Crystal Palace – although Pajtim Kasami’s stunning volley would be enough to gee-up any team (except perhaps, ironically enough, Crystal Palace).

This revival couldn’t have come at a better time for Cottagers manager Martin Jol; it’s not inconceivable the Dutchman could’ve been the one heading to the Job Centre in Ian Holloway’s place had the 4-1 scoreline at Selhurst Park been reversed.

That’s not to say he’s out of the woods just yet, but the victory across town will have given one or two players whose minds were wandering and heads were dropping a much-needed shot in the arm.

Saturday evening’s trip to the south coast is a daunting one, but shouldn’t necessarily be seen as an insurmountable task. Southampton may have the fiercest defence in the Premier League (just three goals conceded in eight games), but they’ve also only scored eight – one fewer than Fulham.

The hosts will be big favourites, but the Londoners have the attacking talent to test them, should things once again click into place.

The most significant absentee could be Fulham defender Brede Hangeland, who, despite not performing to quite the same level as two or three seasons ago, is still key in the Cottagers’ back-line. The Norwegian picked up a back injury during the win at Crystal Palace – ironic, given he probably shouldn’t be picking up anything in his state.

It’s perhaps no surprise that Fulham’s improved performance at Palace coincided with an improved performance from the Bulgarian forward. His willingness to come deep for the ball caused problems for Palace all night, and he’ll most likely look to do the same at St Mary’s. Up against him in the Saints defence will be Croatian new-boy Dejan Lovren, who has been in impressive form in the season’s early months.

This will be the first league meeting between Mauricio Pochettino and Martin Jol, two managers with different eyes for detail when it comes to tactical preparations. Pochettinho will have his team well drilled, while Jol will most likely urge his team to express themselves.

Another tight game featuring Southampton, and, we suspect, a narrow win. 1-0.