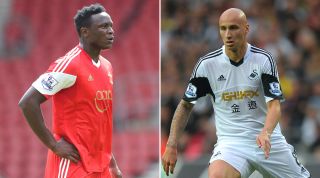 Pleasing passers vs persistent pressers in meeting of the league’s ‘dark horses’.

Swansea have had a mixed start to the 2013/14 season. They’ve taken to European football like Swans to water, but their league form has so far been mixed. They’ve not been helped by a pretty tough opening batch of fixtures – they’ve already played and lost to Manchester United, Tottenham and Arsenal – but they’ll now be keen to starting climbing the league.

Michael Laudrup’s side will probably be carrying the burden of expectation for the first time this term, which may not sit too comfortably on their shoulders given the impressive fashion in which Southampton have started the season.

Saints will start the weekend in sixth place, thanks to back-to-back victories over Liverpool and Crystal Palace. The Hampshire side have conceded just twice in their opening six league matches – the joint best defensive record in the Premier League.

Swansea’s penchant for passing is well documented, and Southampton will need their recent recruit from Celtic to be on top form to stop the visitors knocking their ball around them like playground bullies. The Kenyan has settled in well on the south coast, with Pochettino’s side now no longer so reliant on Morgan Schneiderlin when it comes to midfield steel.

Mauricio Pochettino and Laudrup have met just once before – a 0-0 draw at the Liberty Stadium back in April.

The pair also met three times during their spells in Spain. Laudrup's Mallorca had the upper hand twice, with Pochettino's Espanyol winning the other tie. Speaking ahead of that previous meeting, the Argentine made clear his admiration for the Swansea boss: “I’m very pleased and excited about meeting him and about playing against them, because they promote a style of football that’s very similar to ours. Hopefully we’ll see a good spectacle.”

Southampton's defence to cancel out Swansea's attack. A genuinely entertaining 0-0.