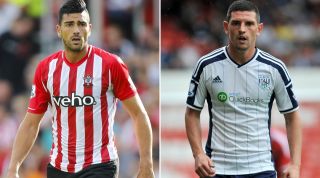 Two of the league's newest managers square off looking for their first win.

Southampton and West Brom fans may well have shared common emotions heading into the new season.

A sense of underlying dread surrounded both after contrasting summers that nevertheless resulted in similar outcomes - the bookmakers slashing their odds for relegation.

Everyone knows about the asset-stripping that took place at St Mary's in the close season, but West Brom too were not exempt from accusations of a lack of ambition after replacing old gaffer Pepe Mel with a manager whose last touchline excursions came in a rather mediocre stint at Sheffield Wednesday.

Still, the summertime is for idle pondering: autumn is where the action is at. And though neither club got off to a winning start, both teams had reasons for optimism on the opening day. Southampton showed that Life After the Three Ls (and Luke) doesn't have to be all doom and gloom, putting in a spirited performance against Liverpool before losing 2-1. West Brom proved they aren't as bad as everyone has been making out, managing a 2-2 draw against Sunderland in a game they dominated for long periods, without ever creating a huge amount, and probably should have won.

Given their predicaments, this weekend's game is therefore very important for both. In a state of flux, wins are the tonic that can ease the minds of nervous fans, and new bosses Alan Irvine and Ronald Koeman must provide reasons for hope sooner rather than later, if for no other reason than to keep the naysayers silent.

Southampton did the double over West Brom last season, gaining revenge for losing six points to the Baggies in 2012/13, but both the scorers in those two 1-0 wins now play on Merseyside. Time for new heroes to emerge, and if James Ward-Prowse, Dusan Tadic and Victor Wanyama maintain the performance levels they put in against Liverpool last weekend, Saints fans will soon forget all about the Lamberts and Lallanas of this world.

West Brom will hope they can add greater resilience to their game, after a loss of concentration following Irvine's rather questionable late substitutions cost them a winning start against Sunderland.

Jay Rodriguez aside, Southampton go into the game with a clean bill of health. This isn't quite the case for the Baggies. World Cup wonder-kid Cristian Gamboa is still short of fitness after an extended break, while James Morrison, Joleon Lescott and Gareth McAuley are all expected to miss out through injury.

Both players excelled in attacking areas for their respective teams last weekend. Berahino scored two goals on the opening day, the first a penalty and the second a back post tap-in to ensure his side didn't start the season with a home defeat. The 21-year-old, described by his manager as 'a model professional', played from a right wing position against Sunderland, cutting inside whenever he could with direct, aggressive diagonal runs into the penalty area. He was West Brom's biggest threat on the day and Ryan Bertrand will have to be alert on his home debut as he attempts to make Saints fans forget all about some guy called Luke Shaw.

Tadic looked very impressive on his debut in English football for Southampton at Anfield. The Serbian wing maestro has been one of the best players in the Eredivisie for a number of years, a constant chance creator with that wand of a left foot. His assist for Nathaniel Clyne's equaliser last weekend was magnificent, an exquisite backheel around Dejan Lovren into Clyne's path for the right-back to thrash home.

Southampton lost some balance when Tadic was replaced by Shane Long - a bizarre decision from Koeman which affected the game negatively for the Saints and swung the impetus back in Liverpool's favour. Both Berahino and Tadic are able to unlock tight defences and as such will be important players on the day.

A not insignificant section of West Brom supporters were dismayed by the appointment of Irvine in the summer, with many looking to Southampton as an example and wondering why their club, too, couldn't show similar ambition with their managerial appointments. Saturday is Irvine's chance to prove them wrong in the first meeting between the two.

West Brom were enterprising and quite solid against Sunderland. Southampton are still finding their feet with an almost entirely new team. 1-1.