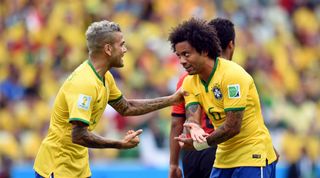 Regardless of whether Brazil are favourites or also-rans, whether they’re playing beautiful football or aggressive football, they always guarantee one thing: top-quality full-backs.

The best example, of course, is the pairing of Roberto Carlos and Cafu, Brazil’s first-choice combination on the flanks for the 1998, 2002 and 2006 World Cups. They were the perfect duo – the former was explosive and dramatic, the latter steady, reliable, dependable. Together, they were the world’s best combination for nearly a decade.

This time around, things are less certain. At right-back, Luiz Felipe Scolari has two right-backs, Daniel Alves and Maicon, who are a few years past their best. Maicon was favoured in 2010, with Alves often having to settle for a midfield slot, but this time Alves started as first choice. Some underwhelming group-stage performances tempted Scolari to drop Alves for the second round clash with Chile, but gave him one final chance – before finally selecting Maicon for the quarter-final victory over Colombia.

Maicon and Alves are both attacking full-backs, but they attack in different ways. Maicon is good at dribbling forward powerfully with the ball before offloading it calmly. Alves’ best work comes without the ball, making dangerous late runs in behind the opposition defence to meet diagonal balls from the left. He’s better when Brazil are on the front foot, whereas Maicon can turn defence into attack.

Physically, they’re also very different. At his peak, Alves was renowned for his energy, but now he’s unable to sprint up and down the line for 90 minutes, he seems much tamer – only 5ft 8in, and not a particularly strong tackler. Maicon, on the other hand, is huge – 6ft 1in, extremely strong, and therefore better suited to this aggressive, combative Brazilian side.

And more reserved with his tackling:

“The coach trusted my work, gave me this opportunity and I hope I paid it back,” said Maicon. He’s unlikely to be dropped for Brazil’s final two matches.

The uncertainty at right-back means it’s especially important that left-back Marcelo is consistent, and so far he’s been one of Brazil’s steadiest, most dependable players despite opening the tournament with an own goal against Croatia. A successor to Roberto Carlos at both club and international level, he’s very different – Roberto Carlos himself once said Marcelo was a superior player, especially on the ball – although he lacks explosiveness.

Nevertheless, his performance against Colombia was a perfect example of what he brings to this Brazil side. Up against Juan Cuadrado, Colombia’s second-most dangerous player after Rodriguez, Marcelo unquestionably got the better of the battle, forcing Cuadrado into his weakest display of the tournament. The left-back was steady and reliable with his distribution, calm and precise with his tackling.

Tonight, the Brazilian full-backs will have a very different challenge. Rather than playing against flying wingers, they’ll be up against Mesut Ozil and Mario Gotze, two intelligent wide creators who drift inside and collect the ball between the lines. It will be up to Maicon and Marcelo to track them part of the way, then pass them onto the centre-backs and holding midfielders, and therefore their decision-making will be given a stern test.

By now, we’ve come to accept that Brazil won’t win this World Cup with dazzling, attacking football – and with their strong tackling likely to be punished more severely than against Colombia, Scolari requires solid, dependable and understated ball-winning. Maicon and Marcelo could be the perfect combination.