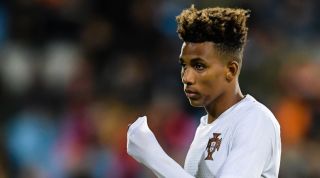 It’s been barely a week since David Moyes was appointed by West Ham, but his return doesn’t seem to have prompted any period of reflection. When Manuel Pellegrini left the club, director of football Mario Husillos followed him through the door, meaning that – once again – the club’s transfer policy is under the control of… who even knows.

But it’s an active department, that’s certainly clear. The club are reportedly close to finalising a deal for Benfica's Gedson Fernandes and, given that the Portuguese midfielder was being linked to some very high-profile clubs 18 months ago, that sounds superficially like a bit of a coup.

It’s not a completed transfer yet, but the deal in principle still raises some concerns – not because Fernandes is enduring a difficult season with Benfica, or that his stock has fallen badly over the last year, but because it potentially conforms to so many West Ham mistakes of the past.

Among the many issues this season has been, according to reports, a lack of dressing-room unity. As far back as October, well-sourced journalists have been describing a fractured squad and the lack of a single focus. Supposedly, one of the main causes behind that has been the large fees and generous contracts offered to certain players and the lack of commitment they’ve shown in response.

In time and perhaps with Moyes’ arrival, some of that distance will be closed. Regardless, though, it remains a situation which should still be instructing transfer policy. With Fernandes, or anyone else they might be pursuing.

West Ham should be in the market for a particular type of player – not of any one nationality, but players who conform to a certain profile. Moyes needs honesty. For the sake of setting an example, he requires players who not only know what it is to play in the Premier League, but also how to compete successfully in it. Whether it’s confirmed or not, the suspicion remains that there are too many recent arrivals at the club who see West Ham as a staging post in their career – who, if they were honest, would admit to seeing East London as an entry point into elite league football.

They’re hardly unique in that regard, because most clubs have players who were signed on the same basis. What makes this situation troubling, is that West Ham have come to be defined by that mentality. They seem content, for instance, to take a risk on a player’s attitude if he comes with a slightly more impressive technical skillset. The veneer matters more than it should, in other words, and the team's suspect chemistry is a consequence of that.

Within that context, it’s difficult to rationalise any move for a 21-year-old Portuguese player who is yet to make 50 senior appearances. Or one who, as an adult, has never lived in a foreign country. There’s no question that Gedson Fernandes has talent, but is he what West Ham need at this specific moment in time – or, as before, is he window dressing for a house which hasn’t been properly built?

The dynamic seems so wrong. First of all because he doesn’t really fit the image of a Moyes midfielder, even if that concept has grown tenuous over the years, but also because young players moving to new countries suffer tremendous upheaval and trauma, making their initial months as much about social acclimatisation as anything else. See Giovani Lo Celso and Tanguy Ndombele at Spurs, or Nicolas Pepe at Arsenal; it’s difficult.

So this deal, if it were to go through, seems indicative of muddled thinking. It would reflect, again, how little the past seems to instruct the present in East London. The numbers and the nature of the offer don’t matter nearly so much as what it appears to represent: another West Ham lunge at a shiny bauble at a time when they have nothing to hang it on.

While you're here, why not take advantage of our brilliant subscribers' offer? Get the game's greatest stories and best journalism direct to your door – only £3 for the first three issues. Cheers!

ANALYSIS What does Liverpool's Club World Cup victory mean for the rest of their season?