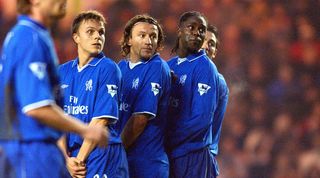 The Chelsea players who took to the Stamford Bridge pitch on 11 May 2003, weren’t to know quite how much the course of the club’s future hinged on the outcome of their match against Liverpool. At least a point was needed to ensure qualification for the Champions League and, more significantly as it turned out, to bolster the interest of a mysterious Russian billionaire.

Since being taken over by Roman Abramovich that summer, Chelsea have gone on to win five league titles, five FA Cups and three European trophies. Fashionable challengers, whose Italian-influenced revival in the late ‘90s had excited supporters but delivered only sporadic silverware, were quickly transformed into serial winners.

In contrast to the unprecedented spree Ranieri embarked on a year later, Chelsea’s transfer dealings ahead of the 2002/03 season bore all the hallmarks of Ken Bates’ parsimony. Enrique de Lucas signed from Espanyol on a free transfer as the only major addition to the first-team squad, with the teenager Filipe Oliviera joining him a few months later. Neither made much of an impression.

Regardless of the club’s financial instability and rising debt, they went seven league games unbeaten to start the campaign, having come from two goals down to beat Charlton Athletic on the opening day. Carlton Cole scored the equaliser and then set up Frank Lampard for the winner in a frantic finale.

After entertaining and hard-fought draws with Manchester United and Arsenal, who would go on to finish first and second respectively, Chelsea eventually tasted defeat away to West Ham United at the end of September. It was the start of a painful week during which they were also bundled out of the UEFA Cup by Norwegian side Viking FK in the first round, and lost to Liverpool at Anfield.

Throughout Chelsea carried plenty of goal threat thanks to a potent strikeforce containing Jimmy Floyd Hasselbaink, Eidur Gudjohnsen and Gianfranco Zola, who was defying age to enjoy his most prolific season at the club. The little maestro was a regular on the scoresheet during his farewell tour of the Premier League before returning to Italy.

Zola remained a potent symbol of Chelsea’s evolution from the slightly drab parochialism of the Ian Porterfield era through to the bright lights and exotic signings ushered in by Ruud Gullit’s arrival in 1995. They became a much bolder and more cosmopolitan club, riding a wave of optimism and competing for major honours.

That sense of confidence had been dulled somewhat by Bates’ subsequent austerity measures but the aura of Zola, Hasselbaink and Marcel Desailly was as strong as ever. By Boxing Day they were second in the table on the back of an 11-game unbeaten run, three points clear of the eventual title winners.

The second half of the season was far too inconsistent from a Chelsea perspective, as they fell off the pace after suffering damaging defeats to Blackburn Rovers, Newcastle United and Aston Villa. Hopes of another FA Cup final appearance were dashed by Arsenal in a sixth-round replay at Stamford Bridge.

All that was left for Ranieri and his team to focus on was securing the fourth and final Champions League spot. It was a straight shoot-out between Chelsea and Liverpool, dubbed rather quaintly, at least by present-day standards, as ‘the £20 million match’ given the rewards on offer.

The often flaky Jesper Gronkjaer scored the decisive goal, after Desailly had cancelled out Sami Hyypia’s early header, and the true significance of that strike only became clear in the fullness of time. Abramovich swept into power in July, and, with his backing, Chelsea spectacularly overhauled their squad.

Although the influx of money didn’t bring immediate success, Ranieri was soon replaced by the dashing young Jose Mourinho as they went on to claim consecutive titles and become the emerging force in English football.

NEWS! Frank Lampard to be offered Chelsea job this week