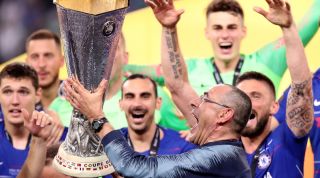 Farewell then, Maurizio. How little we knew ye. A deal has been agreed between Chelsea and Juventus for Sarri to move back to Italy and become boss of the Old Lady; it looks likely someone else will be in the west London dugout come August.

It’s an open field for who the Blues will bring in. The names being whispered as Sarris replacement at Stamford Bridge, albeit quietly, range from Hank Fampard to Rank Lampshard.

Whoever takes over the reigns – and let’s be clear, we have no idea who it could be – will become the 22nd coach to manage a Chelsea game in the 27 years since the founding of the Premier League in 1992.

Not only have they raced through more managers than most, they were also at the forefront of bringing foreign managers into the English top flight – they first had a non-British or Irish manager in 1996, and have not had a permanent manager from these shores since.

We want you to name all Chelsea managers – including interim managers – of the last 27 years. We’re giving you the date they took over, their nationality, and five minutes to get them.

Once you’re done, send us a screenshot to let us know how you got on, and then challenge a mate to do better.