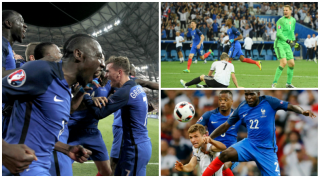 So it's France that will go on to play Portugal in the Euro 2016 final after Antoine Griezmann scored a penalty and stabbed home Paul Pogba's spilled cross. The Germans may feel harshly done by after a tight penalty decision went against them (correctly, but often not spotted/given) and with Joachim Low's side missing Mario Gomez in attack and unable to register the score their play possibly merited.

Regardless, Les Bleus march on and will be confident they can match 1984 by winning the European Championship held on their own shores, as they face Portugal who they have beaten in the previous 10 matches between the two countries.

If France do secure victory, they will be thankful to Griezmann's unerring accuracy throughout the tournament in attack, but also to some outstanding defensive work at the back as both Laurent Koscielny and Samuel Umtiti blunted the opposition's forays forward.

Umtiti retained his place in the team, despite Adil Rami returning from suspension.

TEAMS #GER v #FRA (via @StatsZonehttps://t.co/9BGvjVSluO): Howedes and Can in; Sissoko and Umtiti retained. pic.twitter.com/weM14EkJUl

And both the Barcelona-bound dender and Koscielny were required to put in several blocks to deny Germany who dominated the ball and territory in the first half.

#GER 0-0 #FRA (via @StatsZone): Pattern emerging as Germany have territory and possession but France countering. pic.twitter.com/rNXcoHdSNd

Germany were creating half-chances in the French penalty area, as France struggled to maintain possession and make any effective counterattacks. And for a while it looked like it was a case of when Thomas Muller and Co. would make the breakthrough.

However, Didier Deschamps men did eventually get a foothold back in the game, as Griezmann was finding little pockets of space between the lines…

…while Koscielny was making valiant blocks to deny Les Bleus conceding. France's penalty may not have been given on another day but Griezmann stayed cool from the spot and the home side led.

Koscielny remained a steady influence at the back…

Koscielny having to work hard but having a good game #GERFRA#EURO2016 via @StatsZonepic.twitter.com/N2AYCB3tVY

…and in the second half France improved, poshing back Jogi Low's men and carving out the chances to seal the game.

#GER 0-2 #FRA (via @StatsZonehttps://t.co/9BGvjVSluO): Second half shots for both: France much better. pic.twitter.com/0wsj8frtPM

Eventually a brilliant piece of footwork out wide by Paul Pogba enabled Griezmann to toe home and settle the tie, following Manuel Neuer's mishandling of the cross. (That goal meant that the Atletico attacker has now matched Thierry Henry in goals scored at the Euros.)

And thanks to the diligent work in midfield, from the likes of Moussa Sissoko, Les Bleus held out to be able to win the tournament at the Stade de France on Sunday.

#GER 0-2 #FRA (via @StatsZonehttps://t.co/9BGvjVSluO): Most balls recovered; second most tackles for Sissoko. pic.twitter.com/HxXykrfAVo

If they do, they may just need another terrific showing from Koscielny, who led the way at the back in clearances, blocks and headed clearances.

And another rapier-like attacking display from Griezmann wouldn't go amiss either.