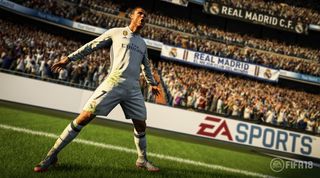 There aren’t many better feelings than scoring a goal. Except maybe, in the case of FIFA 18, celebrating a goal as the show-off icing on top of a very delicious cake. Ranging from the ludicrous to the downright excruciating (to sit through anyway), here are the very best celebrations in FIFA 18 and how to do them*.

*FourFourTwo is not responsible for smashed controllers, broken friendships or bruised egos

Let’s get started with all 12 of the new FIFA 18 celebrations this year.

How to do it: Hold LT and press X/Hold L2 and press square

Want to look like the coolest guy on the pitch? Pulling off the Atletico Madrid forward's tribute to Drake’s Hotline Bling will get you halfway there. Alice band not included.

EA are nothing if not late to the party of the hottest new trends. Gangnam Style and the dab (more of which later) were a few years late and, hey, here’s everyone’s favourite 2015 trend.

Originally planned as a callback to the Frenchman’s outrageous scorpion kick goal against Crystal Palace, many Gooners weren’t pleased with the timing of the celebration: during a 3-3 draw with Bournemouth with the seconds ticking away.

How to do it: Hold LT and double tap Y

How to do it: Hold LB and flick right stick up twice/Hold L1 and flick R3 up twice

One of the new celebrations, inspired by Juventus’s Paulo Dybala, has you channelling your inner superhero. Batman’s got nothing on you.

EA have gone above and beyond in bringing players some very specific celebrations this year. Here’s Lewandowski’s X: only available after scoring goals in FIFA 18 and for crash landings.

How to do it: Hold LT and press Y/Hold L1 and press triangle

FIFA is nothing without its absurd celebrations, and Hypnosis is no different. Gather your team-mates and put them under your spell, before knocking them all to the floor with your telekinetic powers. Brilliant.

Scoring in FIFA 18 often gets the blood pumping, so what better way to use up that excess adrenaline than with a half-dozen press-ups?

You’ve already got the defence dancing to your tune, so why not go one better and bust out an imaginary flute and turn into the Pied Piper of the pitch?

Often the bane of many managers and physios, the failed knee slide makes a welcome return to the FIFA series. Recoil in horror as your star striker’s knee gets planted in the turf, and then sigh with relief as he gets up and starts spinning his arms like a helicopter.

Want to prove you’re the king of FIFA? Kiss the ring and let everyone know who’s boss.

How to do it: (Trademark) Tap A/X; (Camera celebration) Run to the cameraman

The camera-shy lad from Madeira probably doesn’t want all of this fuss but two of his iconic celebrations are in the game anyway. Ronaldo’s trademark "Siiii" celebration (including a ludicrous voiceover from CR7) is here, as is his Champions League sit-and-look-at-the-camera celebration. Just find your nearest cameraman for that one.

Along with the new player-inspired celebrations above, there are also a bunch taken from your favourite players from years past. Here are some of our favourites:

How to do it: Hold LT and rotate the right stick clockwise/Hold L2 and rotate R3 clockwise

There’s nothing quite like the Juventus man’s bird waddle celebration. Will Strictly come calling?

Christian Benteke has ‘contributed’ to one of the Premier League’s all-time great goal droughts with Crystal Palace so FIFA 18 might be the only place you can see the Belgian’s cocksure celebration in action this season.

Despite attempts to copyright one of the easiest hand shapes you can ever make, it’s been copied the world over. You can send some love to the opposition keeper, too. Just don’t let Bale know.

A favourite of one Homer Simpson, Michail Antonio's hilarious move is sure to put the D’oh in "do that to me again and I’ll put my foot through the telly".

Fun fact: the only celebration to be inspired by Phil Bardsley. This tongue-in-cheek knockout punch will hopefully have your opponents throwing in the towel.

Samuel Eto’o may not be reaching for the Zimmer frame just yet – but that didn’t mean he couldn’t poke fun at Jose Mourinho's jibes. Just try not to put your back out doing this.

Want to really annoy your mates? These next three are sure to make any opponents unleash a tirade of expletives and four-letter insults.

The Big Daddy of blood-boiling celebrations. There’s nothing worse than having just conceded and seeing your opponents wheel away and start dabbing, so turn the tables on them.

Normally reserved for children’s birthday parties, patty cake steps into the footballing arena in a big way – by making it the most ridiculous celebration in FIFA 18. We hope they mo-capped this one.

Ah, the shush celebration. The classic. There’s nothing better than nearly inciting a riot with a single finger to the lips.