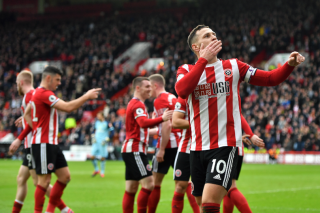 When the Premier League resumes, the most compelling race for the Champions League places in years will begin its conclusion. As it stands, Manchester City remain excluded from European competition for the next two years, making the top four a top five, and giving Chris Wilder’s Sheffield United – only two points off 5th – a very real chance of qualification.

They’re an obvious neutral’s favourite. As a side, they’re also built from reclaimed careers and players who, had the Blades not been promoted to this level, never would have had the chance to compete in the Premier League. John Fleck has made the journey from League One to the top-flight, so have Jack O’Connell, Chris Basham and Billy Sharp.

And, of course, so has Wilder. The appeal in wanting to see that kind of adventure end at the very top of the game is self-evident. What kind of hard heart wouldn’t enjoy that?

• Every date you need for the new football calendar

But it’s not just a simple underdog tale. In fact, to call it that would be patronising. Wilder’s United spent most of the first half of this season being misidentified as a direct, uncomplicated side. Whether that was the product of simple ignorance or pervasive regional bias remains unclear, but it wasn’t really until early 2020 that appreciation for what they were reached some kind of critical mass in the mainstream.

And what are they? A neat jigsaw of abilities. A system team, certainly, but one built out of intricate, complementary parts. Oliver Norwood has one of the prettiest cross-field passes in the division, Enda Stevens and George Baldock are as effective a wing-back tandem as you’ll find outside Merseyside, and those overlapping centre-halves – very much Paragraph One of The Bluffer’s Guide To Sheffield United – are not just a clever tactical quirk, but also the owners of the second-best defensive record in the country.

United have conceded just 25 goals from 28 games and only Liverpool can better that. The difference being that, while Jurgen Klopp’s defence is built around Virgil van Dijk, the £75m totem, Wilder’s entire back-five – wing-backs included – cost less than £5.5m.

In a way, then, Sheffield United are absolutely old fashioned. Not stylistically, but certainly in how they’ve been assembled and why they’re continuing to grow. They’re dependent on chemistry, mechanics and the quality of their coaching, the combination of which isn’t just testament to the work of Wilder, Alan Knill (his assistant) or the players, but the merging of the technical staff and the squad. It’s the group as a whole.

That’s a special place for a football team to occupy. It’s also why a vested interest in their continued progress exists. Not all of the current players have been part of this from start to finish. Some, like Sander Berge, only joined in January. What can be said, though – as a guide if not a watertight rule – is that players who join Sheffield United exceed expectations and are given the opportunity to play the best football of their career.

That’s partly to do with the coaching, but also the way the team seems to adjust to its experiences and adapt to new environments. As an example, some of the phases of play seen in 2019/20 have their roots in 2018/19 or even before – a couple of the set-piece routines are familiar, for instance, as is the way the midfielders move late into the box – but the execution is sharper, quicker and better. It indicates growth. It shows potency. It also creates that perception of a journey – this sense that if the team’s horizons are broadened, it will continue to develop and evolve into them.

Generally, the main draw of European football is revenue and, presumably, that would be hugely important for Sheffield United too. But – and forgive the indulgent metaphor – think of the experience as being the opportunity to browse a vast footballing library, full of different experiences and new reference points.

Pretentious, but probably true. It’s not applicable to all teams. Particularly those who qualify year in, year out and improve by virtue of the transfer market alone. But for a team like this, which seems so fertile, it could be an invaluable experience. How good can John Fleck be? What is the absolute limit of Oli Norwood’s ability? That’s probably how you find out.

Just what is Chris Wilder capable of being? Again, that would be the way to know.

Why that curiosity? Because it’s tedious to believe in glass ceilings. Football isn’t as cyclical as it used to be and, at the top of the Premier League especially, mobility is very rare – even more so when it’s not sponsored by a sovereign wealth fund. But a team rising under its own power, defeating the limitations imposed upon it one-by-one? Of course people want to know how that story ends.