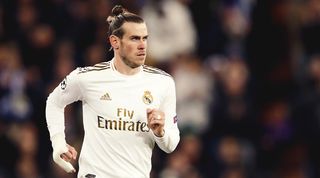 When football resumes, many things will be different. Many will be the same, though, and barring a miraculous change in circumstances Gareth Bale will still occupy that strange, nebulous territory at Real Madrid.

He’s won four European Cups. He scored one of the great goals in his club’s history and yet, still, there’s distrust – of his priorities, his hobbies, and his lack of Spanish. Bale is an outlier.

These are not original observations, neither do they warrant further analysis or judgement. But what remains interesting is the subtle contradiction they represent. On the one hand, football remains as in thrall as ever to tangible achievement. There was evidence of that in the British media just this week, during the ever more tedious rounds of Graeme Souness against Paul Pogba.

Even now, in some quarters, ‘putting your medals on the table’ remains an argument-ending response.

Additionally, while the suspicion of Bale seems largely informed by his separatism and his reluctance to engage with that undefined idea of club life, football continues to celebrate its individuals. Were the game to be progressing as normal, awards season would be upon us now and players and journalists would be submitting their ballot papers, anointing those who stand apart.

Remember, this is a sport which now has two competing World Player of the Year ceremonies. The newer of which was founded upon a desire to re-inflate the diminished ego of the game’s governing body. Culturally, then, there isn’t much indication that team actually does come first and, increasingly, Champions League titles and World Cups are just the metrics used to decide those personal awards.

In that kind of environment, taking issue with a player’s individualist streak seems like hypocrisy. Particularly when that charge is led by media outlets who hang on the whims of superstars and carry even their most banal comments as secular missives.

Whatever the virtues of that argument, though, there’s still no question that Bale has helped draw the perceptions of his own career. He could have moved to a different club. He could have taken salary in return for more footballing importance elsewhere. His representative might have been less bullish whenever questioned about his client’s future.

Could, but didn’t. This is a path he chose.

Ready to take over from Messi and Ronaldo? Why Kylian Mbappe could define the next era of football

He probably has been harshly treated at times, but he has neither seemed particularly concerned by that nor has he taken any steps to address it. There’s little evidence of any PR operation in the background, nor any attempt to reclaim a favourable image or take conciliatory steps.

At a simpler level, neither Bale nor his representatives have understood that one of the game’s secret, yet most valuable currencies is knowing when to leave a club. It’s a precious instinct, particularly when it involves Real Madrid.

Cristiano Ronaldo, for instance, timed his departure perfectly, as he had done from Manchester United years earlier. Both moves had other issues at their heart, but in each instance lay the desire to be a protagonist upon the game and to find an optimal environment for his changing abilities.

Similarly, Zinedine Zidane’s decision to end his first reign as head coach now looks like a masterstroke. Zidane had the foresight to see the issues that were approaching over the horizon and the sense to excuse himself before the consequences arrived.

Bale’s career is emblematic of how important it is to remain ahead of football’s rapidly changing landscape, too, but in the reverse – it’s testament to what can happen if a player misses his prompts. The lighting changes, the scenery is altered and everything becomes incongruous and wrong.

Seven years ago, he was the pot of gold at the end of the rainbow – a player Real Madrid dedicated an entire summer to pursuing. Now, within the space of less than a decade, that pot is an opulent lawn ornament that nobody really wants, but is far too heavy to move.

All of which prompts an interesting question: how will Bale be remembered? Not ‘what are his memories worth’ or what will he mean to fans of his clubs, but how will the game think of him in the years after he retires and what will the cost of these new optics be?

Will his ball-striking ability inspire all sorts of lyrical prose, will the way he attacked defenders and passed through them inspire yards and yards of nostalgia? Will he exist in material terms at all – for supporters not even born yet, will he be part of tomorrow’s cast on whatever replaces Football’s Greatest, and will 2040’s teenagers be able to buy and wear his retro shirt?

The answers will come in time, but what they’ll reveal is the importance of how a career is pitched. The memory of a player depends on far more than just what they were literally able to achieve. It draws also from the entertainment they were able to provide, the scarcity of their attributes, and also – more tenuously – to their utility, to how coaches used them to evolve the sport, and also – crucially - to how they themselves used their ability.

Ultimately, modern football rewards everyone who reaches its summit. With wealth, with celebrity. But longevity is more elusive and tends to be reserved for those who’ve affected the sport in a particular way – those who have been in position to represent something important and who aren’t just a part of history’s detail.

In that context, Bale will be a cautionary tale. Because he could have been one of those players and he might have been properly appreciated. At his best, he was a force. Not just a very good player, but someone for whom the sport didn’t really have an answer.

The combination of his goalscoring, his pace, and the way he could sustain his acceleration over long distances didn’t cast him as one of the most talented players in the game’s history, but it made him unusual and it portrayed him as the sort of footballer around whom so much could happen. In different formations, using different, newly developed habits, and surrounded by different types of player.

The possibilities might have been endless. After all, Bale combined productively with Peter Crouch, Hal Robson-Kanu, Roman Pavlyuchenko, Karim Benzema and Cristiano Ronaldo. That’s a fairly eclectic list and suggestive of a variation which – actually – the world didn’t get to see enough of.

Maybe that will be the memory attached to Bale? As someone who drew the curtain on his own greatness. To such an extent that he can’t really be considered a ‘great’ at all.

It would be grossly unfair considering everything that he’s achieved, but that seems to be the trade-off that he’s accepted. Or the one which he’s created with this indifference to his own standing.