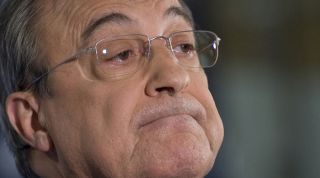 Being Real Madrid president is an easy-peasy business when the team is winning and the superstar players are performing. In those times, life is all about comfy, chauffeur-driven cars, huge free lunches and generally larking about. Yet when times are troubled, the president’s existence is restricted to merely comfy, chauffeur-driven cars, huge free lunches and putting out an endless series of fires in the press.

Florentino Pérez is currently very much stuck in the latter category, with all sorts of issues cropping up in a game of media Whack-A-Mole. The team’s head honcho is dealing with stories ranging from a hunchback Gareth Bale calling for his Esmerelda, to insinuations that the current top dog at the Santiago Bernabeu wants the job for life and beyond.

The Madrid big cheese is having to cope with a team that is not playing well, a crocked, expensive “mega-crack” and the most terrifying time during any La Liga season - an international fortnight, a period when a bored football media make merry with all kinds of nonsense.

Florentino’s immediate issue was a weekend story published by Marca that suggested Gareth Bale has a hernia, something that could be a big problem when it comes to actually playing football. The paper claimed the footballer was suffering from a disc protrusion that could require surgery in the long term.

“Absolute nonsense”, was the approximate response from Carlos Díez, head of Sanitas, the medical group that looks after all the hurties and boo-boos of the Madrid players. The reality, says Díez, is that whilst protrusion exists, it isn’t necessarily a hernia. “Ah, but it could be in the future” was the approximate response from Alfonso Del Corral, the former head of Real Madrid’s medical services.

As well as Bale’s back, Pérez has had to fend off accusations from members of the opposition camp that the president is looking to have his job for life, a dream currently restricted by the club being owned by its members. One of those who threw this raw meat into the media shark pool was Juan Onieva, a Vice President under previous president, Lorenzo Sanz. “I’m certain that the ultimate goal of Florentino is to convert the club into a PLC and end up controlling it,” claimed Onieva.

Pérez, rather fairly, pointed out that the ramblings of a man who left the club in a sorry financial state at the beginning of the last decade should perhaps be taken with a pinch of salt.

The current president also cleaned up the off-message suggestion from Zinedine Zidane that Frank Ribery was the deserved recipient of the next Ballon d’Or prize. “I know Zidane thinks Cristiano Ronaldo is the best in the world,” was the confirmation of what should have been the correct answer from the Madrid coach.

In a chat with part-TV-show-part-therapy-session Punto Pelota, there was also time to drop a hint that Radamel Falcao could be the next Galactico signing, and that the naming rights to the Santiago Bernabéu are also up for grabs.

The most recent blow-out is probably going to be delegated to Carlo Ancelotti, who will have to handle a rather unhappy-sounding Sami Khedira, who has been grumbling to the German media during the international break. The midfielder opined that selling Mesut Özil could be costly, the fans are wrong to get on his back and that the local media hate him because “I’m not Spanish, I don’t cost a lot and I’m a disciple of Mourinho.”

Although upcoming coming clashes against Juventus and Barcelona are daunting prospects for Real Madrid, Florentino Pérez may welcome the chance of a temporary distraction, no matter what the outcomes of the games.