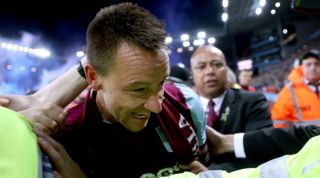 The 37-year-old signed a one-year contract at Aston Villa last summer and has made 35 appearances in all competitions for the Championship club.

According to the Guardian, Terry is willing to extend his deal – but only if the two conditions are met.

In his news conference before Saturday's play-off final against Fulham, Aston Villa boss Steve Bruce said the club would be willing to accept the defender's demands.

"Well, we’ll not pick him against Chelsea if that’s what he wants," the 57-year-old told reporters.

"I really, genuinely hope he triggers it. All those phone calls to him, he hasn’t been disappointed with it. You can’t be disappointed when you walk through here."

Bruce has been impressed with Terry's leadership qualities ever since he walked through the door last summer.

He added: "I just knew what he would give. Let’s be fair, he has been one of the great defenders of our country.

"He is a great leader of men, which we don’t produce many of any more, and in a quiet way; he is not a ranter and a raver, he is not one who puts heads through doors.

"He is calm. People like [Jack] Grealish have looked up to him and thought: ‘Is that the way I’ve got to be to be a top player?'"