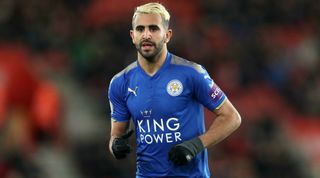 According to Algerian outlet Le Buteur, somebody posing as the 26-year-old had been spreading fake transfer rumours to 'famous journalists' on WhatsApp.

The individual has reportedly been asking for privileges, such as tickets to matches and signed shirts, in exchange for transfer scoops.

According to the report, he first lured reporters in by using a photo of Mahrez with Cristiano Ronaldo to prove he was who he claimed to be.

Reports of the Leicester winger being in Barcelona at the end of the summer transfer window is one of the false stories apparently created by the WhatsApp man, while Liverpool's purported interest – and a reported medical – also originated from the same source.

The conman is said to have been exposed after further investigations from Mahrez's people. His team are now investigating the possibility of pressing charges against the man believed to living in France, according to the report.

Watch: Estoril led Porto through brilliant free-kick – but match was abandoned thanks to crumbling stand

Carlos Tevez calls his seven months in China "a holiday"​