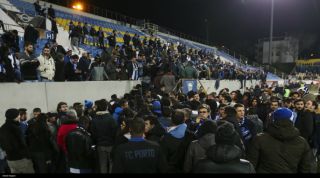 Teixeira's excellent strike on the quarter-hour mark gave the hosts a shock lead, as he lobbed goalkeeper Jose Sa from a tight angle.

But while both teams were receiving their half-time team-talks, the 2,500 travelling Porto fans were told to exit their stand at the Antonio Coimbra da Mota Stadium and head for the pitch.

Fans reportedly saw concrete blocks falling down near the toilets. So, in the interests of safety, security ordered the visiting supporters to evacuate amid fear of a total stand collapse.

After a prolonged conversation between police and security, with a few thousand fans waiting on and around the pitch, the match was suspended and the second half will be played at a later date.

In an official statement after the match, Porto said: "The match Estoril - FCP, scheduled for this Monday evening, for matchday 18 of Liga NOS, has been suspended at half-time for safety reasons.

"No date to resume the match has been set, as the decisions will have to be reached by agreement between both clubs."

Carlos Tevez calls his seven months in China "a holiday"​