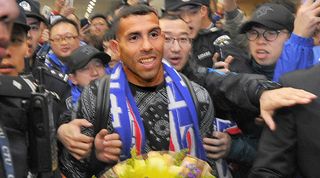 The former Manchester City and United striker has completed a move back to Boca Juniors for the third time in his career. The 33-year-old walked out on Boca 18 months ago to join Shanghai Shenhua and became the world's highest-paid footballer.

However, his time there was unsuccessful having scored only four goals in 20 appearances with plenty of criticism surrounding his application and commitment to the club.

Having joined Boca, he's confirmed his real feelings about Chinese football by telling the Argentine media he was there enjoying himself.

"I was on holiday for seven months in China," the former Argentina international joked to TyC Sports.

"It's fine for the Shanghai coach and president to criticise me, I didn't know what I was doing there."

Money and Chinese football couldn't buy Tevez happiness, so now he vows to dedicate his focus to Boca once again.

He added: "I know there are people who were annoyed by how I left, but that's normal. I was not in a position to give 100%, but it was going to hurt the fans no matter what I did.

"Now the fans will see me again with the Boca shirt and they will be excited and happy."