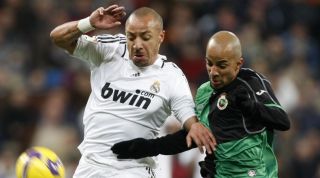 While sweating to help Kilmarnock avoid relegation from the Scottish Premiership, Julien Faubert may occasionally stop and reflect on what could have been.

The former West Ham ace joined the struggling Ayrshire club in February after half a season as a free agent, but this is a man who has climbed to the very top of the football tree.

Faubert became the first player to wear the France No.10 shirt after Zinedine Zidane in 2006, and secured a dream – if completely bizarre – loan move to Real Madrid in 2009. He was in football nirvana.

The omens were good, but the Frenchman wouldn’t fulfil the potential those early years promised. The historic friendly against Bosnia-Herzegovina proved to be the only time he would represent les Bleus – a goalscoring display, nonetheless – while he only made two appearances as a Galactico.

The 32-year-old’s football odyssey has taken him to France, England, Spain, Turkey and now Scotland, and he’s filled with pride when reviewing his career so far.

“I’ve had many highlights, like when we came back from the Championship with West Ham, playing for Real Madrid and starting at Bordeaux,” he tells FourFourTwo.

“I’m happy about everything I’ve done in my career, I have no regrets.”

In August 2006, Zidane’s shadow loomed large over French football after the World Cup final defeat to Italy in which Zizou saw red for his headbutt on Marco Materazzi.

However, Faubert insists he wasn’t fazed by adorning the legend’s shirt only five weeks on from that fateful day.

“I was young so I didn’t think about the number on my shirt,” he recalls.

“I was just ready to play. Even if I only played one game, for 20 minutes, I scored and it’s a good memory.”

However, Faubert is critical of the much-maligned coach Raymond Domenech for not giving him another chance. “I can’t say I had a bad relationship with Domenech – we didn’t have one,” he explains.

Faubert’s international career has continued, albeit in a different direction, as he began representing Martinique in 2014. His record so far? Five goals in five games.

The Killie man reflects on his time with West Ham fondly, admitting that he still watches their games every week from Scotland.

He arrived at the Hammers from Bordeaux in 2007 for around £6 million, and overcame a bad injury to help Alan Curbishley’s team finish 10th in his first season.

Faubert admits he ‘felt the difference’ after moving from Ligue 1, and was particularly impressed by one former team-mate.

“I always liked Scott Parker. He’s the kind of guy you can go to war with,” says Faubert. “He leaves everything on the pitch. He fights for his team-mates, fights to win, and that’s my mentality as well.

“I like Mark Noble, James Collins and James Tomkins as well. They were friendly in the changing room but on the pitch they were men.

“That’s what French people have to learn from the English. They’re really professional, they don’t complain about anything. And that’s typical of the French!”

Bolt from the blue

Just as he was settling in at Upton Park, a momentous opportunity fell on Faubert’s lap when Real Madrid came calling in January 2009.

Before he knew it, the right-back was training alongside the Galacticos less than a year after recovering from serious injury.

“You realise straight away that you’re at the top because they give you everything just to think about football,” he explains.

“When I arrived on loan I signed on January 31, and then on February 2 everything was ready: my flat, a school for my kids, cars, everything.

“You can fit straight in and then when you’re on the pitch you’ve got amazing quality alongside you. You feel immediately that you’re in the biggest club in the world.”

RECOMMENDED 16 of the weirdest transfers in English football history

Unfortunately for Faubert, he wasn’t afforded many opportunities with the Merengues, and only made two appearances in the famous white shirt under Juande Ramos. Despite that, the Frenchman has no regrets.

“I learned a lot even if I didn’t play a lot. I learned the winning spirit. You play with guys who’ve won the World Cup, the Champions League, but they still want to win.

“Even if they play the bottom team in the table they want to win, they’re never bored of it.”

A bizarre subplot to Faubert’s time in Madrid was when a video appeared to show him sleeping on the substitute’s bench during a league match against Villarreal.

The footage has become archive gold, but he denies that it tells the whole story.

“I spoke with the boss at Madrid and he said that when you play for this team you have to be careful about everything, when you talk on the pitch or the way you act.

“They said you’ve got 10-15 cameras always only on the bench. I just closed my eyes because I was bored for half a second and they took a picture and said I was sleeping! But I don’t sleep on the bench – I prefer a bed...”

Faubert racked up 121 appearances for West Ham upon his return to London, before departing in 2012 after helping the club back into the Premier League. Four years on, his bond with the club remains strong.

“I understand now how some French people play in England, come back and say ‘I’m with this team for life’ because I’m the same,” he explains.

“Even once I’m retired, my club is West Ham. I love the club, the people who are there and the fans. That’s my club.”

From Spain to Scotland via...

Eric Abidal: Guardiola worked hard, but he was a bit lucky to win everything in his first season

Kelechi Iheanacho: I’m grateful to Pellegrini – but now I need to show him I deserve to be here

It isn’t for now, though: following spells with Elazigspor, Bordeaux (again) and a six-month unattached spell, he’s back in the UK with Killie.

While Ayrshire may not have the glamour of Madrid or London, Faubert’s determination to test his mettle has seen him join up with ex-Blackpool boss Lee Clark north of the border.

“I was really professional to go back and show I’m not done,” he says.

“I liked the mentality of the manager because he knows football really well. Even if we’re in a bad situation, I can see we play really well and want to play football. It’s a really professional club and it’s got everything, so that’s why I came here.”

Killie only offered Faubert a deal until the end of the season and he’s hinted at where he sees the next step on his winding career path.

“I was interested in going to America and I had offers from MLS before,” he reveals.

“I’d expected offers from the top teams, but nothing came. I could stay in Scotland or go elsewhere. I just want to keep playing because I’m still competitive and I love my job.”

Passion has fuelled Faubert’s journey. From France to Martinique, the Bernabeu to Rugby Park, he’s seen a lot at each end of the spectrum.

At the age of 32, the Frenchman’s journey is far from over. But for now, keeping Killie in the Scottish top flight is priority No.1.