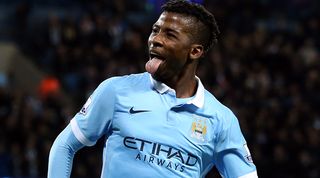 Kelechi Iheanacho might not realise it, but the 19-year-old is something of a poster boy for Manchester City. As the only notable youth graduate in Manuel Pellegrini’s first-team squad, the young Nigerian is flying the flag for a highly ambitious academy that’s still in the early stages of providing players good enough to make their mark in one of the country’s biggest teams.

That the 2013 Under-17 World Cup Golden Ball winner has managed as much is quite some achievement for a player who has overcome a lot early in his life, including the tragic death of his mother last year. Iheanacho is grateful for the confidence Pellegrini has show him so far. “It’s good when as a young player you’re introduced to a top team like Manchester City and you need to do well,” the Nigeria international tells FFT. “It’s my job to show to the manager that I deserve to play in the squad and I deserve that chance.

“I know that as a young player I need to work hard for the team, work extra in training and in the game as well so that they will see that you need more games and you need to play.”

The good news for Iheanacho is that his wish looks likely to be fulfilled. The teenage striker has featured in five of City’s last nine Premier League games off the bench, is in the running to be included in their Champions League knockout squad, and could start Wednesday night's League Cup semi-final second leg.

His targets are not yet refined, though. Iheanacho is a quiet player who would rather let his football speak as he tries to stay in Pellegrini’s thoughts, but like any young footballer he wants to prove himself.

“All I know is that I work hard in training and in games,” he shrugs. “I just want to keep working hard.”

City go into the second leg against Everton trailing by a goal after their late 2-1 defeat at Goodison Park the first time around, but Iheanacho says confidence is strong as they look to overturn the deficit.

“The mood is great in camp, confidence is high going into this game,” says the 19-year-old. “We’re ready. Everyone is ready.

“We understand the magnitude of the game at hand. We need to win, because at Goodison Park they beat us 2-1.

“We need to play the football we know we are capable of playing; to play with intelligence and work as a team. We are playing in our home so we need to give our fans something to smile about.”

Even though Iheanacho is cautious of Everton, his team have never lost at home in a cup competition against the Toffees, winning three matches and drawing another.

“This game is obviously a must win; if it’s not, we shouldn’t bother playing in the first place.”

City need no reminder of what they come up against on Wednesday night: despite Everton’s patchy form this season they have Romelu Lukaku firing on all cylinders, having scored four goals in five League Cup appearances this season – including the 78th-minute first-leg winner in this tie.

But that doesn’t bother Iheanacho or his team-mates much. Partnering a great striker himself in Sergio Aguero, the young Nigerian says he and the Argentine have a great relationship both when they play and away from football, too.

“Sergio Aguero is a great player, I learn a lot from him,” Iheanacho smiles. “We have a great relationship on and off the pitch. On the pitch we play well together as you can see, we work well as strikers.

“Off the pitch we talk a lot, in training and in the dressing room. His English is good and we communicate well. Our football also speaks for itself, I think.”

While Man City won this trophy in 2014, beating Sunderland, Everton’s last League Cup final appearance came in 1984 when they lost to city rivals Liverpool after a replay at Maine Road, City’s home until 2003.

“Everton are a good side, they’re coming to play us and to win,” says Iheanacho, seriously. “We’re expecting that. We just need to concentrate and get a win. We can’t lose focus.”