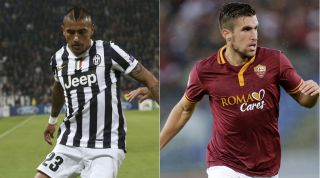 Serie A resumes after its winter break with the biggest fixture of the season so far, as Juventus host Roma on Sunday evening. Antonio Conte’s league leaders have won the last two titles and their last nine league matches, while Rudi Garcia’s visitors remain unbeaten in 2013/14. It’s a genuinely fascinating clash between two extremely exciting sides.

There will be intriguing battles across the pitch, but the most interesting contest will be in the centre of midfield, where the two best midfielders of the Serie A season will face off for the first time. Arturo Vidal has grown into the best all-rounder in Italy, and perhaps the world, while Roma’s Kevin Strootman is arguably the signing of the season, following his move from PSV.

Both men have been linked with Manchester United recently, despite Vidal signing a new Juve contract and Strootman's agent denying any interest, and you can see why David Moyes would love either player at Old Trafford: they neatly summarise the dominant style of football at this moment. Whereas the previous half-decade was defined by neat, intricate possession football, and ball-hoarding was considered more important than ever before, over the past couple of years we’ve witnessed a slight decline of the ‘Barça school’ and the emergence of more physical, combative football. Bayern Munich summarise it perfectly – they’re superb technical footballers, but can turn up the heat and become powerful when needed.

Vidal and Strootman would fit in nicely at Bayern. Both are technically marvellous footballers – Vidal dispatches penalties into the top corner with unerring accuracy, while Strootman has a wonderful left foot and the type of vision you expect from a Dutchman. Yet both are incredibly imposing in a physical sense: Vidal is the most terrifyingly relentless midfield worker you’ll ever see, while Strootman is 6ft 1in, broad-shouldered and strong in the tackle.

Opponents are never entirely sure what type of battle they’ll be up against – both players have the guile to dictate the flow of the game, or the power to batter the opposition into submission. Their battle – and with Strootman playing left-of-centre, and Vidal right-of-centre, it should be a direct clash – could be the most fascinating battle of the European season.

So how do they compare? In terms of energy, both are extremely impressive. Describing his style, Strootman says “I like to play from one side to the other…I do both phases of play, attack and defence, without a particular preference.”

In other words, he’s a box-to-box midfielder. Vidal could be described as something similar. “I have enough strength and endurance to have [Andrea Pirlo’s] back. Fatigue does not frighten me, I’m a fighter,” he says.

This is most obvious by looking at their tackling statistics – despite being talented technicians for big clubs, both players are amongst Serie A’s top ten tacklers. Vidal is not only more prolific when tackling – he’s also more successful.

In terms of distribution, Strootman is the more impressive midfielder. Vidal is a very frantic player that continually darts between midfield and attack at great pace, and can sometimes be rushed with his final ball. But Strootman is calmer, more measured on the ball, helping his side retain possession and spreading play reliably out wide.

Strootman completes around 11 passes more than Vidal per game, with a 4% better completion rate – he’s more of a ball-player, whereas Vidal leaves the creativity in deep positions to Pirlo, and scampers forward off the ball.

Because he’s more careful with his distribution, Strootman creates fewer chances than Vidal. But he’s actually recorded two more assists in Serie A this season, suggesting that his chances are of a better quality.

However, Vidal remains the better goalscorer – of his dozen goals so far this season, he’s managed six from open play in the league, and specialises in late runs past the centre-forwards into a goalscoring position, essentially becoming an extra striker. Strootman is more of a threat from long range – and while he’s scored four times in Serie A this season, two have been from the spot.

The two players shoot with similar frequency, but Vidal gets himself into dangerous positions more frequently, and therefore scores more goals.

Although they occupy the same zone, and are a similar breed of midfielder, there are still obvious differences between Vidal and Strootman. The Chilean excels at a wider range of duties – he’s simultaneously a more prolific tackler and a more prolific goalscorer, while Strootman is more of a classic central midfielder, able to pass more consistently and reliably. Whichever gets the better of Sunday’s clash will probably find himself on the winning side.