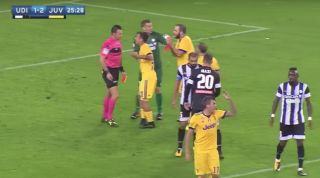 In the 25th minute, with the Bianconeri 2-1 ahead against Udinese at the Stadio Friuli on Sunday night, Croatia international Mandzukic was issued consecutive yellow cards for complaining to referee Daniele Doveri over a contentious decision.

Despite being a man down for the majority of the match, Juventus ended up winning the Serie A match 6-2 as Sami Khedira scored a remarkable hat-trick.

After the game, in a subtle dig towards the match officials, Juventus manager Maximiliano Allegri joked he wanted Mandzukic to be sent off.

"I wanted to rest Mandzukic for the next game anyway," he told Mediaset Premium post-match.

"In fact, I want to thank him because we had to get back to winning games by defending and suffering for the result, so we can only thank him.

“Over the last two games we had decent performances, but we needed something like this. Down to 10 men, the team was much more focused."