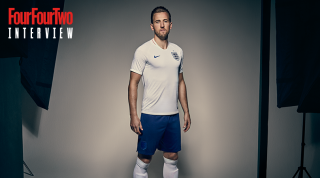 Southgate has been in no rush to name a long-term England skipper, with Wayne Rooney, Jordan Henderson, Gary Cahill, Joe Hart, Eric Dier and Kane all donning the armband.

The 24-year-old has captained his country four times, scoring crucial injury-time goals against Scotland and Slovenia to seal the Three Lions' place at this summer’s World Cup finals.

And the Tottenham talisman has admitted that he would be honoured to lead the Three Lions full-time, but will continue to focus on scoring goals in Russia whether he’s skipper or not.

Speaking exclusively in the June 2018 issue of FourFourTwo magazine, available now, Kane says: “The manager has said he will make that decision in his own time, so we’ll have to see. I’ll do my job whether I’m wearing the armband or not, but it’s certainly something I’d be extremely proud to do.

“We’ve got a great attacking team. Hopefully we can score a lot of goals and I’ll get a few myself. The focus is on the team, but as a striker, you’ll always have your eye on winning the Golden Boot.”

Although he netted within 79 seconds of his England debut, against Lithuania in March 2015, Kane’s international scoring rate has rocketed since Southgate succeeded Sam Allardyce in October 2016.

Having scored five goals in 17 England matches in 2015 and 2016, Kane smashed seven in the space of six matches last year – including doubles against Malta and Euro 2016 runners-up France – to deservedly bag the Player of the Year award.

The 24-year-old believes regular game time, rather than a change of style under the former Middlesbrough manager, is largely to thank for his prolific form in front of goal.

“I wouldn’t say there was anything particular that changed – it was just a case of getting a good run in the team,” he explains.

“Scoring away to Scotland and then getting a brace against France was a massive confidence boost. To get that consistency of scoring for England in successive matches has made a big difference.”

Read the full interview with Harry Kane in the June 2018 issue of FourFourTwo magazine. The latest in our series of World Cup special issues, we analyse the challenges facing Neymar, Lionel Messi and Cristiano Ronaldo in their bid to achieve international immortality, hear from Davor Suker, Hristo Stoichkov, Toto Schillaci and more about how to win the Golden Boot, wonder what’s happened to 2014 hero Mario Gotze, and definitively reveal which of the 20 tournaments is the best ever. Plus, we go One-on-One with Australia legend Tim Cahill, and preview the 2018 World Cup with a comprehensive 68-page guide to this summer's finals in Russia. Order a copy now, and then become a subscriber!