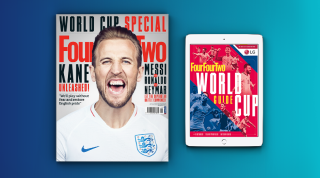 The first time we discussed putting Harry Kane on the front cover of FFT was in January 2015.

He was midway through his first full season as a regular starter for Spurs and had scored six goals during the Christmas period, including a brace against Chelsea. The North London derby was around the corner and maybe, just maybe, it was the right time for his first big interview? In the end, the general consensus was that it was a bit too soon. After all, we’d just interviewed Cristiano Ronaldo and Lionel Messi for the cover and were negotiating with Neymar for a Copa America special.

Oh, how things have changed. In just three short years, Kane has gone from the fringes of the Tottenham first team to being England’s one true world-class player, who will travel to Russia this summer just behind Messi, Ronaldo and Neymar in the betting odds for the World Cup Golden Boot.

Not that England’s No.9 is fazed by the challenge ahead: he wants to compete with the very best and, crucially, make watching England fun again. If he can do that, it'll have meant the Three Lions had a successful World Cup. What success looks like right now is unclear, but that shouldn’t stop us from enjoying another fascinating football festival. The World Cup’s almost here, and we can’t wait.

To help get you even more in the mood for it, this month's magazine is accompanied by a 68-page preview. It's packed full of profiles on all 32 teams, an interview with a player from every nation, youngsters to keep an eye on this summer, and handy Russian phrases to shout on the terraces.

England’s leading man can’t wait to compete at his first World Cup, and who can blame him? Having firmly established himself in the Champions League, it’s now time to take the world by storm...

It’s hard for anyone in Brazil to forget how Germany humiliated them on home soil four years ago, but Neymar is determined to create happier memories in Russia. Can the Seleção move on at last?

He's won every club trophy going, but for Leo Messi, international success remains elusive. And, ahead of what he says could be his last World Cup, the strain is there for everyone to see.

CR7 heads to Russia this summer with a single mission: proving once and for all that he’s the greatest player of all time. And what better way to do that than with a Euros and World Cup double...

How to win the Golden Boot

Suker, Schillaci, Stoichkov and Salenko joined the exclusive club of World Cup marksmen through talent and technique – but don’t underestimate the power of a mad haircut or urinating dog.

He scored the winner in the World Cup final after being told to "show you’re better than Messi" by his manager. Fast-forward four years and the former golden boy is now struggling to save his career.

It’s the debate that'll hit every office, pub and playground – which was the best World Cup ever? We review the good, the bad and the aggro from all 20 tournaments to bring you the definitive answer.

Everton, Millwall and Australia legend Tim Cahill answers your questions, including: does Sean Dyche eat worms? Will he ever forgive Pierluigi Collina? And what does he have against corner flags?

In our fun-packed front section, James Richardson answers silly questions, Alex Iwobi tells us about representing Nigeria at the World Cup and Siphiwe Tshabalala recalls his ripper for South Africa in 2010. Plus, Lothar Matthaus explains how team spirit could take a country all the way in Russia.

The 1966 World Cup wasn’t just about England’s glory on the pitch – off it, a cartoon lion broke new ground in merchandising, and the badges, beer mats and bedspreads flew off the shelves. Plus, we learn about the birth of red and yellow cards, and recall Scotland’s date with Brazil at France 98.

Iran coach Carlos Queiroz talks to FourFourTwo Performance about young managers and the traits that great players share. We also try out some revolutionary analysis software, read Jonjo Shelvey’s secret diary and get taught a foam roller routine that will help to ease post-match aches and pains.

Got your copy of the new FourFourTwo? Tweet us @FourFourTwo using #MyFFT

Grab it now: Available in print and on iPad and iPhone. Subscribe to FourFourTwo here!