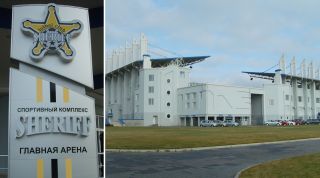 It is doubtful Tottenham Hotspur could have been handed a more intriguing set of opponents in this season’s Europa League group stages.

After breezing past Tromsø, the Norwegian side located a little over 200 miles inside the Arctic Circle on an island enveloped by snow-capped mountains, and then rags-to-riches-to-rags-again Anzhi Makhachkala from Dagestan, now shorn of its star names, next up for André Villas-Boas’ team are Sheriff Tiraspol.

The Moldovan champions, who play in Transdniestr, sit comfortably in Tromsø and Anzhi’s company. Many fans would no doubt have been furiously thumbing their way through atlases or pointing browsers at Wikipedia when the draw was made this summer. Sheriff are, after all, a club few over here will be familiar with, hailing from a forgotten corner of the Soviet empire that even fewer could point to on a map. Not that many maps actually feature Transdniestr, of course.

Tiraspol is the second-largest city in Moldova (or the largest city in Transdniestr), and arguably one of the most curious places in Europe. Well, at least if you're not a Moldovan. The separatist region of Transdniestr (or Pridnestrovskaya Moldavskaya Respublika to the mainly ethnic Russian and Ukrainian locals who make up the bulk of its 550,000 population) occupies a tiny sliver of land in eastern Moldova between the Dniestr River and Ukraine, and possesses all the trappings of sovereign state.

It has its own president and government, flag, anthem, currency (you get about 20 Transdniestrian rubles to the pound), passport, stamps, police and army, not to mention he fact Transdniestr controls its own borders (happily for Spurs fans, the prospect of being asked to buy a “visa” has almost ceased these days) and for all intents and purposes operates as an independent country. All that’s missing is an invitation to Eurovision.

The international community doesn’t recognise Transdniestr’s independence, not even Russia, and the region is stuck in limbo. In fact, it’s as if the Soviet Union never collapsed at all. Tiraspol exudes an air of provincial Russia and retains more than a faint whiff of Soviet-ness.

Lenin statues and Soviet iconography still proudly adorn Tiraspol’s tired streets that bare the names of such communist luminaries as Karl Liebknecht, Rosa Luxembourg and Karl Marx. What’s more, the Transdniestrian flag is decorated with a hammer and sickle motif.

The roots of its ambiguity can be traced back to the Second World War and the carving up of the region. The Soviet Union created what essentially became Moldova by fusing together the Romanian region Bessarabia and the autonomous Dniestr area of Ukraine, but problems arose as the USSR began to fall apart.

The growing sense of Moldovan nationalism – and the possibility of reunification with Romania – created unrest in Dniestr, who declared independence and Moldova descended into a brief but bloody civil war. A ceasefire was signed in July 1992, but left an uneasy peace between Chişinău and Tiraspol. Its status as one of the post-Soviet zone’s “frozen conflicts” has reportedly made it a haven for corruption, organised crime and smuggling.

The economy is dominated by the Sheriff company, whose ubiquitous yellow and black badge features on everything from a TV station to petrol stations, supermarkets to a mobile phone network, a construction company to bread factories and a whole a lot more. They also own Moldova’s premier football club.

Founded in 1997, Zhelto-Chernie (the Yellow and Blacks), were created by a former KGB officer and the majority of its employees initially worked as either police officers or in the army. Quickly, they set about establishing themselves as the Divizia Naţională’s pre-eminent side.

During Soviet times Zimbru Chişinău (who Spurs beat 3-0 on aggregate in the Uefa Cup 14 years ago) were Moldova’s biggest club and dominated its football after independence, winning eight of the first nine league titles, but Sheriff, with whom they share a fierce rivalry, have been crowned champions 12 times in 13 years.

What’s more, Sheriff built their baby a multimillion, state-of-the-art stadium complex that sprawls across more than 50 hectares on the western fringes of Tiraspol, and includes a hotel, academy, Olympic-sized swimming pool, tennis courts and medical centre among other facilities. Moldova has no such stadiums and it is the envy of many clubs in eastern Europe. Sepp Blatter on a visit there once described it as “wonderful”.

It seems unlikely too many Transdniestrians could afford one of the gleaming Mercedes from the attached dealership though.

The pair have predictably taken Sheriff to the top of the table this season. They are five points clear of last season’s surprise package Veris Singerei, having lost just once and scored 35 goals in 12 matches (26 of them netted by Brazilians), conceding just six. Spurs arrive with Sheriff on a 14-game unbeaten run.

Obviously the Moldovan championship is very different to the Premier League, but there was hope of reaching the Champions League group stages this season; Sheriff are certainly getting closer. After all, this is the third time in five years that the club have reached this round of the Europa League and they made one or two notable additions to a multinational squad this summer.

There are 11 different countries represented in the Sheriff dressing room: a handful of Africans, including long-serving Burkina Faso attacking midfielder Benjamin Balima, one or two from the Balkans, defensive midfielder Kobi Moyal from Israel shielding the back four, Spaniard centre-half Melli (missing this evening through suspension) who played almost 200 times for Real Betis and no fewer than six Brazilians, among them 23-year-old Luvannor Henrique, the league’s top scorer with 11 goals and a Moldovan passport after being naturalised earlier this month.

Villas-Boas may not field his strongest XI this evening, but for Sheriff the tie represents perhaps the biggest fixture in the club’s brief history and tickets sold out a week ago.

What’s more, a result against Spurs really would help put Transdniestr on the map.