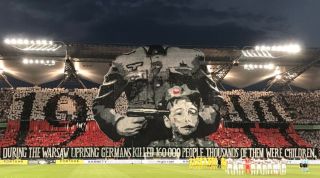 Events to mark the occasion were taking place across the city on Wednesday night, and those inside the Polish Army Stadium didn't want to miss out.

The uprising, which began on August 1, 1944, was a Polish revolt against the Germans in an attempt to drive the Nazi forces out of the city. The 63-day battle led to between 150,000 and 200,000 people being killed, most of them civilians.

As you can see, Legia fans didn't hold back with their tifo.

They then watched their team win 1-0 through a Jakub Czerwinski strike in the 76th minute, but the Polish side were knocked out 3-2 on aggregate.