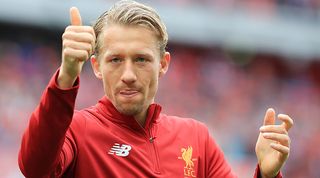 The Brazilian made 346 appearances during his 10-year spell at Anfield, having joined them from Gremio as a 20-year-old in 2007.

He became an integral part of the Liverpool squad throughout his decade-long association, winning the club’s player of the year award in 2010/11 and playing a part in their 2012 League Cup run – the Reds’ first major trophy since 2006. He did, however, miss the final thanks to an ACL injury suffered in the quarter-finals.

After making only 12 Premier League starts in 2016/17, Lucas called time on his time on Merseyside last summer by joining Serie A giants Lazio. Speaking in the August 2018 issue of FourFourTwo, out now, the Brazilian says it was the toughest call of his career.

“Yes, that’s for sure,” he says. “I spent a lot of time thinking about it, but I believe it was the best for me.

“Life is made of cycles, and I came to the conclusion that my time at the club had come to an end. But my affection for the club and fans will remain forever.”

Those feelings were reciprocated by Reds fans last season when they hijacked a Twitter poll for Lazio’s player-of-the-year award, helping Lucas win by a landslide with 71% of the votes.

The 31-year-old admits he still enjoys receiving support from Kopites, telling FFT: “I get lots of nice messages from them. I really do have this special feeling for Liverpool and the fans – it’s something that will never change.

“I’m so grateful for the wonderful years that I lived at Anfield. Whenever I receive a message from a Liverpool fan, don’t doubt that I’ll read it from start to finish because the messages make me really happy.”

The Brazilian quickly adapted to life in Serie A last term, managing four goals in his first season – only three fewer than the total he managed in his entire Liverpool career.

One of those came against Dynamo Kiev in Lazio’s crucial second-leg last-16 Europa League tie, edging the Biancocelesti ahead on aggregate.

“At Lazio I have some freedom to go forward and help the team in the transition between midfield and attack,” Lucas says. “Finding the back of the net is a nice feeling, I can’t deny it!”

Read the full interview with Lucas Leiva in the August 2018 issue of FourFourTwo magazine, in which we reveal David Beckham’s turbulent quest to be football’s first superstar owner, and look back to 1998 when he came Public Enemy No.1 following his red card at the World Cup. Also, we speak to new Liverpool signing Fabinho about becoming the new Stevie G at Anfield, recall the bonkers the story of Graeme Souness at Rangers, find out what Arsenal fans can expect from the four men filling Arsene Wenger’s sizeable shoes, visit the London-based firm fighting match-fixing around the world, and hail some of the worst football teams ever. Subscribe today!