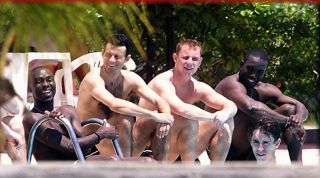 “We’re not on holiday,” replied Phil Neville sternly. That was 20 years ago this week, inside Rio de Janeiro’s Intercontinental Hotel.

While Real Madrid’s players, who stayed in the same hotel overlooking the Atlantic, were so approachable that some United fans kept in touch afterwards with Raul and Fernando Hierro, United’s were not. The club trained behind closed doors, annoyed locals and failed to perform on the pitch. United’s trip to Rio was shrouded in controversy from start to finish, with the clownish Piers Morgan accusing the club of disrespecting the FA Cup for not competing in it.

United weren’t the first team from Manchester to play in Rio when they jetted off for that inagural FIFA Club World Cup. Non-league Cheadle Town, using the touring name ‘Manchester FC’ had played Vasco da Gama in 1985 and 1991. Their defeats were expected. Manchester United, the reigning English, European and world champions, were not anticipated to give as poor a showing as they did on their first ever trip to Brazil. Then again, they weren’t used to playing in the sauna-like conditions of the high Brazilian summer like the other teams. The treble winners had barely got over their jet lag from being crowned world champions a few weeks before in wintry Tokyo.

A few hundred of us travelled to South America to support the team, with all flights and hotels costing around £1,300. It was something to look forward to, but we were cautious when we flew since we’d been bombarded with negative stories about the city before we flew via Madrid.

“You must remember that in the area you are staying, Copacabana, there are many creatures of the night,” our driver told us from the airport.

Everyone told us to be careful. United told us not to travel on the metro, not to eat seafood, not to stray from the tourist areas, not to walk the streets at night. We did all that and more. It was brilliant. We even sang ‘Flamengo’ inside the Maracana to wind up fans of opponents Vasco da Gama.

It helped that we met Pablo on day one. He’d been travelling around Brazil and immediately told us about the bad press United were receiving as they had planned to do nothing to meet locals and were portrayed as arrogant English. I felt embarrassed.

On the first night, we headed to a bar/disco by our hotel, a cavernous place intriguingly named ‘Help!’ which claimed to have the biggest dancefloor in South America.

‘Oh, hello, this is paradise,’ we thought since it seemed that every Brazilian girl wanted to talk to us and say, in broken English “I want to spend the night with you.”

Of course they did, they were prostitutes. We were crestfallen, but still went back most nights and tried to chat up girls with ridiculous lines like “Is the Sugar Loaf really made of sugar?” or “Do you think Barnet should be expelled from the Football League for not meeting the minimum stadium requirements?” Our Portuguese amounted to adding ‘io’ on the end of every English word. One-io, beer-io, obrigadio.

Martin Edwards, then United chairman, had been in there without a care in the world as he told United fans what a great place Rio was.

United’s first game was against the Mexicans of Nexaca in the Maracana. Despite scare stories of the stadium not being ready for the tournament, 90,000 seats were in place after a light smartening up (the ground was properly redone for the 2014 World Cup finals). The legendary venue was practically empty but for a few thousand Vasco fans (their first game was to be played later) and our group of nine were booed as we made our way to our £5 lower tier seats. A few of the blaggers got hold of matchday programmes before the game, a poor effort littered with mistakes. A Saudi player had been at his club for 112 years, while Beckham was noted for “his millimetrically planned throws to Cole and Yorke”. The heat was unbearable and the stadium announcer pronounced Solskjaer as ‘Shoeshine’ in English and ‘Gunnarshoes’ in Portuguese.

Nexaca took the lead before Yorke equalised. Not the best start for United.

Vasco were next, a big game. They had Romario, who’d destroyed United at Camp Nou in 1994 and Edmundo up front. Their egos were so big they didn’t get on with each other, but they were still world-class strikers.

Vasco fans were not hospitable outside the stadium throwing plastic bottles as we entered the ground and making slit your throat gestures. Someone held up an Arsenal shirt – like we were arsed. They were though when we started singing ‘Flamengo’.

And then a mad thing happened. Two United fans walked into the empty section ground, one dressed in a green and black polka dot silk dress, complete with luminous matching green Reebok pumps. His mate wore a United shirt and a jester’s hat.

Thousands of home fans started to boo them and then threw bottles at them. They soaked up the abuse as if to say “Is that it?” before proudly walking around the United section to cheers.

Vasco were loud, though. The United following was 400 strong, including some locals with a ‘Brazilian Red Devils’ flag and when we started singing “United!” we got a massive reaction from the 73,000 crowd. We also sang: “We’d rather be in Grimsby than Brazil” (City were playing at Blundell Park). The noise they created was magnificent, the tunes original and inspiring. We gave it our best shot but it was impossible to compete, as it was for the United players. Two uncharacteristic Gary Neville mistakes led to a 1-3 defeat.

‘Obrigado Gary Neville,’ read the headline on a local paper the next day.

‘How are you Gaz? Fiasco da Gama,’ Paul Scholes texted in support.

United were out with a dead rubber to play against South Melbourne but we still had two weeks in Rio. The Australians were staying in a nearby hotel, their players semi-professional lads no different from my family back in Manchester. They were loving it as they sat around the pool with a beer, and why not?

Rio’s probably the most stunning city on the planet. If only humans hadn’t been allowed near those cartoon-like mountains, lush forests and long white beaches. Sugar Loaf, Christ the Reedemer, we saw the lot. We walked onto the gay section of Leblon beach while we were looking for the mythical area ‘where all the super models went’ and met the main Flamengo ultras downtown. They told us that they’d been supporting ‘Manchester’ and had planned a street party if they’d beaten Vasco. They didn’t want Vasco becoming world champions since Flamengo were the only Rio team with that title after a 1981 win in Tokyo.

The leader was recovering from pneumonia and couldn’t meet us in a bar with air conditioning. He also carried a gun as he explained that they’d organised billboards welcoming Manchester to the Maracana and FlaManchester t-shirts. He reckoned that no mayor would go against their plans for street parties since Flamengo were so popular. He was not impressed with United for playing youngsters (to be fair, United played strong teams except in their final game vs Melbourne) and for their players being inaccessible. He said United missed out on a chance to make a lot of friends in Brazil.

The United fans tried their best, though. Pubby, a well known fan, kept the local economy for tourist tat in business buying velvet scrolls of Sugar Loaf or cheap trinkets as he introduced himself as ‘Bryan Griggs’ to locals, though another, John Taylor looked incredulous when we asked him if he wanted to come to a favela and a samba school.

“What the f*ck do I want to go to a fruitella for?” he asked.

“What the f*ck do I want to gawp at an old man for?” He had a point on the last one, since the old man was the great train robber Ronnie Biggs who’d escaped from prison in 1963 and eventually wound up in Rio after several failed extradition attempts. His son Michael hosted parties of (paying) visitors. We went and it was pretty pathetic looking at a man recovering from a second stroke and struggling to speak. It felt like a freak show. Biggs did say that he longed to see the green grass of the English countryside one more time.

Stung by the bad publicity, the United players went to the beach and played football with locals as part of a UNICEF initiative. The club said this had always been pencilled in, but it was too little, too late. Madrid had held open training sessions, while some of their players had even sang ‘Yip Jaap Stam’ in a hotel bar. The United players did go against the grain by hand-gliding above their hotel without Sir Alex Ferguson’s permission.

Vasco met Corinthians in the final and 30,000 travelled the six hours from Sao Paulo to support their team. We got tickets in the vast away end and marvelled again at how loud football fans could be.

Our section of 15,000 was covered in a giant black flag of an eagle, while there were other anti-Rio slurs and Japan flags (Sao Paulo has a large Japanese population). There was a massive ‘Ayrton Senna, hero of Sao Paulo’ flag too. That was waved to the accompaniment of a drumbeat and a constant song of ‘We are the all-powerful team’. It was one of the best atmospheres that I’ve ever experienced at a football match.

Corinthians won the final on penalties, with the distraught Edmundo missing the key Vasco penalty.

What else? My travel partner got a full sit-down interview with Michael Platini for the United We Stand fanzine. We also tried to get in a club where Rio’s rich and beautiful went – not with Platini. The bouncers looked as us like we were street rats and even our line of “Look mate, we’re with Patrick Snell. He reads the news on Granada TV and he knows Lucy Meacock,” didn’t get us in.

There was a silver lining. We were supposed to be flying back to a Mancunian winter but our flight was delayed 16 hours and the airline accommodated us in a five-star hotel in Flamengo. The pool was surrounded by Brazilian air stewardesses who were supposed to be on our flight. We didn’t speak to one. I regret that to this day, but the view was fabulous.

We did go for drinks in Lapa though, well off the tourist track and were confused when people started streaming out of a night club at 8pm. Bizarrely, the pied piper figure among all the local girls wore a Manchester United shirt. He looked cooler than Keane and we spoke to him and had a beer. He explained that he’d been a United fan for six years and wanted the people of Rio to see what a great team they were. He too, felt let down.

“That doesn’t bother me since the memory of what happened in Barcelona is stronger,” he said, which put it into perspective perfectly. We got to visit Rio as a bonus of that victory and United, perked up by their jaunt to the sun, went on to win the league.