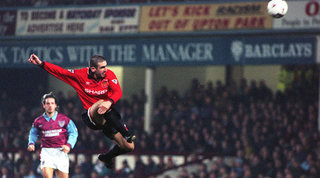 Twenty-four years ago, Eric Cantona was reaching the end of a remarkable month of form. Beginning with that dragged volley at St James’ Park on March 4, 1996 which holed Kevin Keegan’s Newcastle below the waterline, Cantona would be Manchester United’s only goalscorer in four consecutive games.

It’s a story retold often enough – of how he returned from Selhurst Park and suspension to lead United to the title – but frequently without the detail, or without quite enough reference to what he actually did in March and April. Cantona’s meander through the Tottenham defence at Old Trafford and his balletic volley over David Seaman four days before were – and remain – Premier League goals for the ages. Brilliant goals, both of them, and now part of Premier League lore.

His scoring sequence would actually run to six games, with a penalty at Manchester City and another winning goal against Coventry, but it was that run of four which took United to the top of the table and put them in a position they would never surrender.

Just over a year later Cantona would be gone, off into early retirement. But the power of his return remains emblematic of what he was to United. The tour de force in early spring of 1996 also defined his role within the league itself. He was its dominant figure, but also its most magnetic character. He was the player who had to be watched. The personality, the billboard, the decisive factor.

Over time, the memory of Cantona has been hijacked by cliché. The dimensions of his personality have been retracted and the range of his abilities overlooked. He’s glorified now for a very narrow range of goals, whereas a higher vantage on his career has always shown a fascinating variety fundamental to his enduring appeal.

The skating run and left-footed drive for Auxerre, for instance, scored on a mudheap of a pitch against Rouen in May of 1985. Or a thumping hit rammed into the Strasbourg net with his right, just a few weeks later. And that forgotten masterpiece for Leeds United, when he juggled through the Chelsea defence at Elland Road to seal a 3-0 win.

The 100 best Premier League players ever

All of those goals were typically his, but without really bearing any relation to each other. They combined abilities which would usually be found in different skillsets belonging to separate players, and that – inadvertently – describes who he was.

He didn’t really have such a thing as a trademark. He moved brilliantly to the back-post and regularly found goals by drifting in late and unmarked, but without that ever really becoming a dominant trend.

He was also one of the best one-on-one finishers the Premier League has ever seen, with that strangely nerveless technique which could slow a game – or even a cup final - to his will. But that hardly described the great force which he was often able to exert and with which he would break a game open.

He was a player of fascinating contrasts. Cantona could bludgeon shots from the edge of the box, but was also – at any moment, without warning – capable of moments of great subtlety, in that very famous chip over Lionel Perez, or the equally light touches at The Dell and at Bramall Lane.

Maybe that lob against Sheffield United was actually the perfect study of Cantona and his many contradictions?

Those who remember that game will recall just how windy it was at Bramall Lane that night. The conditions can still be seen in the footage, with the litter blowing off the terraces and onto the pitch, and United played into the gale in the second half. Late on, with the game there to be finished, Cantona sent a chip up into the elements, begging the wind to drag it off course.

It’s his most artistic goal. It was also one of his most ridiculous decisions. A player who does that can probably be described as inhabiting his own space in the game. It was creative, yes, but also provocative – like he was taunting the conditions and challenging them to subdue his talent. Remarkable. But those few seconds also described - vividly - why he had to be watched. Not why he was entertaining for football fans or why he was invaluable to Manchester United, but how he dared anybody with a television to change channel when the ball was anywhere near him.

If anything, however, Cantona’s less literal side was the more intriguing. Unfortunately, that too has been reduced over the years, becoming merely suggested at by well-worn anecdotes. What happened at Selhurst Park in January 1995, for instance, may be a remarkable footnote in English football history, but it diminished Cantona. It made him much more famous – or notorious – but it herded him into an already over-populated bracket of talented people who lacked self-control.

MORE ON THE KICK Eric Cantona's kick, 25 years on: How he went from foreign villain to international treasure

That combustibility certainly added to the spectacle – the sense that anything could happen at any moment – but at the cost of an appreciation for Cantona’s deeper texture. It was his own fault, of course. Even before he arrived in England, he had already thrown the ball at a referee in a game against St Etienne in December 1991 and, in a fracas with the French Football Federation, threatened to retire in protest over the punishment. Naturally, his dropkick ‘tackle’ on Nantes’ Michel Der Zakarian also remained entangled with his reputation, as did his throwing a boot in the face of Montpellier teammates Jean-Claude Lemoult.

ERIC CANTONA INTERVIEW: "I didn’t hit the Palace fan strong enough. I should have hit him harder"

In England, it would get worse. Over time, legends like the one which arose from the Ali Sami Yen stadium in 1993 only made him a more binary figure, casting him as someone who just fluctuated between good and bad, prancing wildly between darkness and light.

United had been eliminated by a goalless draw with Galatasaray in a famously febrile Champions League atmosphere and, having been sent off after full-time, Cantona was struck on the head by a policeman’s baton as he made his way back to the tunnel.

Roy Keane remembered the aftermath in his autobiography:

"In the dressing room, Eric went crazy. While the rest of us just wanted to get out of there, Eric was determined to sort out the rogue cop who had been wielding his truncheon.

"Eric was a big, strong lad. He was serious. He insisted he was going to kill that f---er. It took the combined efforts of the manager, Brian Kidd and a few of the players to restrain him."

Gary Neville’s recollection was even more vivid, recalling in his own book that: “Pally, Robbo, and Brucey had to drag Eric in and hold him (in the dressing room). The experienced lads were to the shower two by two, so that Eric was never left alone in the dressing room. They ended up walking him to the coach to stop him going back after the police.”

It was Cantona behaving in a way that most would identify with. It also furthered the idea of him as someone who wasn’t concerned with boundaries or troubled by the nascent expectations shouldered by modern footballers. He had been wronged and he was having his vengeance; clearly that’s a seductive theme and also one around which his reputation continues to pivot.

Our new issue is on right now: featuring Cristiano Ronaldo's quest for international immortality, the rise and fall of Michel Platini, the story of Greece's unlikely Euros triumph and much more

Treat yourself for the weekend https://t.co/S7o574FnsHpic.twitter.com/FnmLH7VVvg— FourFourTwo (@FourFourTwo) April 2, 2020

But it’s also one which does him a disservice – or at least one which simplifies the issue of why he was and remains such an enrapturing, impermeable figure.

Philippe Auclair’s biography of Cantona stands above the rest. Not just because of its detail, which is enviable, or the author’s access, but also its angle of approach and its willingness to attack these reductive platitudes. It’s essential reading and also fundamental to understanding who the person was behind the player, and why that identity was so important.

Cantona was different – and not in the “seagulls behind the trawler” way. His upbringing was unusual. His reference points were original. The way he thought about life and love and what it was to be a footballer didn’t conform. The Rebel Who Would Be King contains all sorts of fascinating tales and asides which make those points, but perhaps the most instructive story lies in Cantona’s response to winning his first cap for France.

It’s a passage which should really be read in full, but even in abridged form his post-game interview after a 1-2 defeat to West Germany is startling:

‘”I didn’t feel any pressure on me”, he said with the straightest face he could conjure up for disbelieving hacks. “I am not an emotional person and I took this game as if it were a banal league game.

"Why should I have made a huge thing of playing against West Germany? The questions I asked myself were purely tactical. I thought about my game. I concentrated. That’s all”

The lie at the heart of that quote is that Cantona wasn’t emotional. Clearly that wasn’t true, because he had all sorts of sensitivities that manifested in all manner of ways. But it depicts his otherness so well. It’s such a familiar scenario and a player’s response to winning his first international cap is such an established routine that Cantona’s shrugging disregard is oddly fascinating.

READ IT Buy The Rebel Who Would Be King from as little as 24p!

In an abstract sense, it’s the behavioural equivalent of that goal against Sheffield United – it’s startling and shocking and surprising all at the same time, and so obviously not what should be have been said or done. When you expected placement from Cantona he gave you touch. When you braced for power, he gave your precision.

And isn’t that who Cantona was? After all, there were others from his era who were just as talented. There were even some who were as tempestuous and volatile. But there aren’t any who live in the mind now in quite the same way or who so quickly quieten a room when they appear on television.

We’re not still trying to work those players out, a quarter of a century later. They aren’t as elusive.

Cantona’s identity is still his goals. It’s still his touches and his technique and, yes, his temper. But what stands him apart now is that amorphous personality. It’s something which seems to change shape whenever touched and that, probably more than anything else, is what keeps the game grasping at him after all this time.

QUIZ Can you name the Brazilians with 20+ Premier League appearances?