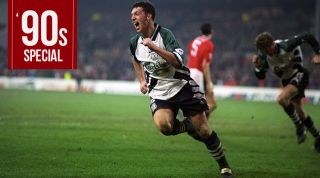 Get your hands on the latest issue of FourFourTwo magazine - available in print, or alternatively on iPad and iPhone – now

Nobody played more games in the Premier League’s first 10 years than Speed, and a supreme commitment to fitness allowed him years later – aged 35, then 37 – to play every match in two of his three seasons with Bolton. His top-five tally of 535 Premier League appearances will not be surpassed soon.

But Speed’s greatness was about more than consistency. In his 1990s prime with Leeds (where he won the title in 1991/92), Everton and Newcastle, the Welshman brought leadership, intelligence, versatility, creativity, grit, guts and goals: 80 in the Premier League, one every six or seven games, and many of them headers – uncommon for a midfielder, winger and full-back.

You heard. Pallister’s relative reluctance to embrace the spotlight after retirement has wrongly undermined his importance to ’90s-era Manchester United. Yet the centre-back partnership of Pallister and Steve Bruce was as intimidating as their nickname, Dolly and Daisy, was not.

PFA Player of the Year in 1992, Pallister made four consecutive Teams of the Year; five in total. And amid four titles in his six Premier League campaigns with United, they somehow conceded the fewest goals in the two they didn’t win: just 54 across 80 matches in 1994/95 and 1997/98. At least someone was doing their job.

Enthusiastically dubbed “the thinking man’s Carlton Palmer” by The Times following his Arsenal debut, Vieira became one of the Premier League’s greatest midfielders. His low position in this countdown is only because the Frenchman was just 23 when the ’90s ended and, even with his World Cup and Double double in 1998, yet to reach his towering peak.

Nonetheless, ’90s Vieira had tremendous all-round talent. Posterity paints him as a destroyer, but he excelled at beating players and keeping the ball. He created goals, too – including, unfortunately, one for Ryan Giggs in a certain FA Cup semi-final replay in 1999.

As 2000 dawned, Beckham bestrode England like a colossus, his image seared into every brain cell. So, when Posh ’n’ Becks frenzy reached its height in 1999 with the holy trinity of marriage (in a castle), an heir (with a celebrity name) and reference in American pop culture (Eminem pondering “which Spice Girl to impregnate”), many asked if Beckham – whose red card had precipitated England’s World Cup exit the previous year – was actually any actual good at actual football.

Of course he was. Fabulous technique and an almost masochistic commitment to training made 20-year-old Beckham a regular in Manchester United’s Double-winning team, before he kicked off their 1996/97 season with a goal from his own half. By 1999/2000’s close, Beckham – a right-sided midfielder more than a winger – had scored or assisted 88 goals in his 175 Premier League games. Yeah, he could play.

On his Arsenal debut, Adams played alongside Pat Jennings. In his final Arsenal appearance, he played alongside Ashley Cole. To be at the heart of one team’s defence for nearly 20 years is impressive enough; to do that while the team changes beyond all recognition, and as captain from 21 through to retirement at 35, is pretty special.

Arsene Wenger was Adams’ fifth manager at Highbury, yet his lifestyle revolution seemingly posed a threat: Adams had revealed his alcoholism in a front-page exclusive just as his new boss was being appointed.

However, the two worked together to banish Arsenal’s drinking culture, and Adams kept a famous defence in line (literally) while Wenger added flair and fluidity to the front six. The result: two Double wins in five years. Their later spat resembles a particularly tragic divorce.

Today’s cynics might scoff that we were taken in by Ginola’s Gallic flair and glossy hair. His middle name is Desire, after all.

However, it's no coincidence that Newcastle’s consecutive title challenges came during Ginola’s two years on Tyneside. Then, at Spurs, in the season when Manchester United won an unprecedented Treble… well, to quote Wikipedia: “Ginola was voted PFA Player of the Year and FWA Footballer of the Year after helping his club win the League Cup.” Even with the United vote split, that says a lot for the Frenchman’s broader impact in England.

The quintessential ’90s footballer… was probably Ian Walker. Those curtains defined a decade. But so did Le Tissier, not just surviving but thriving in the last football era that would let him.

Le Tissier’s relaxed approach to diet and conditioning was a choice. He told FourFourTwo: “I knew I had the ability to change games without being as fit as the other players on the pitch.” He narrated the inner monologue of so many fans: ‘I could do that, but I can’t be arsed.’

The Guernseyman scored 160 league goals (60 pre-1992/93) for a Southampton team camped in the bottom half, yet his slovenly style, stifling a yawn as he sauntered past defenders and picked his spot, made brilliance seem almost attainable. They don’t make them like that any more.

In 1993/94, no fewer than 12 English strikers scored 15+ goals in the 42-game campaign. But Fowler, who exploded onto the scene that season, had an insatiable hunger that set him apart. One goal became three, regularly and rapidly: the quickest of Fowler’s nine Premier League hat-tricks – second only to Alan Shearer – destroyed Arsenal in four minutes and 33 seconds. He was 19.

Preternaturally clinical, Fowler scored half of his 163 Premier League goals before his 22nd birthday. Injuries enforced a slow decline, but in the mid-’90s he wasn’t just good – he was God.

The backheel against Norwich, the scooped assist for Gus Poyet, that FA Cup semi-final goal… we could just show a highlights reel. But Zola, FWA Footballer of the Year in his first Premier League season, was more than skill and dribbles. He left a huge impact on Chelsea, their fans – who once voted him Chelsea’s greatest ever player – and English football.

Watching him cartwheel across the turf as Manchester United secured the treble, one forgot that Schmeichel was 35. It concluded an epic 63-game club season (unbeaten from Christmas) and his 1991-1999 United career, as the toll on his 16-stone body prompted a move to Portugal.

Schmeichel’s size made him intimidating, his long reach and starfish jumps producing unlikely saves. But you don't keep 112 clean sheets in 252 Premier League matches without organising a defence, and that was the key to Schmeichel’s brilliance – and United’s dominance.

Wright was the archetypal late bloomer. The striker was nearly 22 when he swapped Tunnel Refineries and non-league football for Crystal Palace; 25 when he made his top-flight bow; 27 for his England debut; and his Arsenal transfer came seven months after that, in September 1991.

It was some achievement that he became Arsenal’s record goalscorer (until Thierry Henry surpassed him) and represented England as late as their Euro 2000 qualification campaign.

He also played his part in the 1997/98 Double triumph. In his lowest-scoring – and final – season with Arsenal, Wright nonetheless hit nine goals in their first 10 league games before succumbing to injury. That they lifted the FA Cup with their departing hero an unused sub, while Christopher Wreh started, is rather sad.

As with fellow Welshman Gary Speed, appraisals of Giggs’s playing career often cite his longevity over his ability.

So, remember: Giggs the winger – ’90s Giggs – was a phenomenon. He was fast, crossed with precision, averaged a goal or assist every two games throughout the decade, and took wonderful free-kicks that gave Manchester United the choice of his left foot or Beckham’s right.

While his metamorphosis into a midfielder was admirable, seeing Giggs tear down the touchline was the purest delight.

Captaincy in football is a largely honorific role, and its importance can be overstated. On the other hand, there’s Roy Keane.

Signed by Manchester United for a record fee after he'd made the 1992/93 PFA Team of the Year despite finishing bottom with Nottingham Forest, Keane was 21 when he arrived, yet played more league games in his first season (37) than in any later campaign.

Between suspensions and injuries, Keane inspired his United team-mates with his infectious work rate, crucial goals and... er, bellowing. After the midfielder’s all-action performance in Turin for the second leg of their 1999 Champions League semi-final, Alex Ferguson wrote: “It was an honour to be associated with such a player.”

Keane’s influence even extended to his absence. A spoiler for our top three: there is no Scholes. For most of the ’90s, Scholes was a half-decent forward, in and out of the team. An injury to Keane meant Scholes dropped back, and the stellar midfielder was born.

“The pleasure of scoring goals is known, but for me, the pleasure of the assist came close. It’s like solving a puzzle. I always had a picture in my head of how things would look two or three seconds later – I could calculate it. There’s a tremendous pleasure in doing something that someone else couldn’t see.”

Bergkamp’s words to FFT in 2011 perfectly encapsulated his own aesthetic appeal. He was also ruthless. Arsenal’s Double-winning team had several stars – and Marc Overmars’s remarkable habit of scoring vital goals was underrated – but only Bergkamp, PFA Player of the Year and FWA Footballer of the Year with 27 goal contributions in 28 league games that season, combined art with end-product so efficiently.

Goal tallies aren’t everything, but nothing better illustrates Shearer’s 1990s greatness. His record was preposterous.

In four years at Blackburn, the ex-Southampton marksman delivered a Premier League title and 112 goals in 138 matches. The world’s best No.9 today, Robert Lewandowski, scored 106 in his past 138 appearances, and his wingman is Arjen Robben, not Stuart Ripley.

And Shearer remained prolific despite injury. His first Blackburn season brought a snapped ACL. He was 22, at a new club, stricken... and scored 16 goals in 21 games. At Newcastle, he had one season (31 games, 25 goals, a second PFA Player of the Year award and a third Golden Boot) before torn ankle ligaments forced him to become a targetman – whereupon he still scored one in two.

In total, Shearer netted 260 goals in 441 Premier League games for two teams who, between them, averaged a seventh-place finish. Again: preposterous.

Yes, his cult status is elevated by popped collars, kung-fu kicks, seagulls and trawlers. Nevertheless, in just four-and-a-half years at Manchester United, Cantona shaped English football in the 1990s like no other player.

Ranked! The 15 best Premier League goals of the '90s

The 12 most memorable football quotes of the 1990s

Serie A in the '90s: when Baggio, Batistuta and Italian football ruled the world

When the Frenchman arrived in November 1992, United were eighth, having scored fewer goals than two teams in the relegation zone. Then Cantona strolled into the changing room like a bomb defusal expert assuring citizens that everything would be fine. His attitude was invigorating; so too, the way he dropped deep and demanded the ball before driving forward and assisting team-mates or, as with that famous chip against Sunderland, going it alone. United recovered to claim their first top-flight league title since 1967.

Cantona was a powerful yet creative force. Most importantly, he scored when it mattered. In the spring of 1995/96, with Newcastle pushing his team all the way, Cantona netted in six consecutive games. The scorelines were 1-0, 1-1, 1-0, 1-0, 3-2 and 1-0; his goals included the winner at Newcastle and a 90th-minute equaliser. Then he scored the only goal in the FA Cup final against Liverpool as Manchester United sealed the Double.

Inexplicably, Cantona retired at Old Trafford aged 30. Having made his United debut in an invitational held for Eusebio, his final appearance came in a testimonial for David Busst. You can’t have everything.