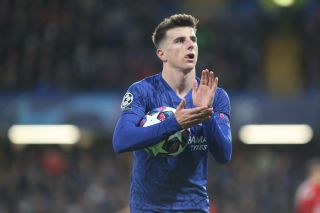 Mason Mount’s first full season in the Chelsea first team came sooner than it might have done. A loan in the Championship usually precedes one in the lower reaches of the Premier League and then, depending on how successful it’s been, a decision is made on the player’s permanent future.

Viewed from that angle, Mount has really made a quantum leap in the game. He’s not just a part of Chelsea’s squad, he’s an integral member of their side. Nobody has started more games for Frank Lampard than he has this season, and with that privilege has come all sorts of new pressures and responsibilities.

He dealt with very public failure for the first time, after that humiliating opening day defeat at Old Trafford. He has played in the hothouse derbies against Arsenal and Tottenham. And he’s also experienced the good and the bad of the Champions League, most recently suffering through that humbling night against Bayern Munich.

Mixed in with which, of course, have been all sorts of other incidents and events. His England debut, for instance. Or the shocking abuse suffered by Tammy Abraham, his close friend, following Chelsea’s penalty defeat in the European Super Cup. If anything illustrated just how ludicrous – how poisonous, malicious, emotionally incontinent – the game can be at the highest level, then that episode was surely it.

Those are specifics, but one of the more general challenges facing younger players today is how the imperatives that underscore their development clash with the game’s changing culture. How, essentially, they’re often denied what they need by what football has evolved to become.

The assumption exists that academy prospects are treated differently. That they are afforded more understanding as they play their first games and that the crowd responds to their mistakes only ever with encouragement. While that remains true to an extent, it’s not quite as reliable as it once was.

Supporters still take pride in a fertile academy, that’s certainly true, but many are enslaved to transfer culture. The race for new, exciting signings is really a sport of itself and the reaction to high-priced, alluring players is natural. A £50m 25-year-old will always capture the imagination in ways that a teenage waif can’t; it’s like the difference between eating out and cooking from scratch.

Within that context, unfortunately, in certain situations a youth player can almost be seen as an obstruction. As a slow, even laborious route towards success and a weak justification for money not being spent and a side not being strengthened. The game has made us all impatient and, ultimately, prone to those kind of frustrations.

Today, then, it’s probably more accurate to say that fans enjoy seeing homegrown players on the teamsheet, but that when a game actually starts and the season’s objectives are in the balance, most of the normal rules apply.

Mason Mount’s season has proven that dynamic. By the end of that first weekend back in August, there was already a suggestion that Lampard was being wilfully blind - that he was too loyal and too set on staking out his own coaching identity. If there was a honeymoon period, it didn’t last for very long.

Which is remarkable, because these are no longer the days when academy legends grow in the dark. It’s been possible to watch Mount excel for Chelsea’s academy teams for many years, and also to win major competitions with England’s youth sides. His talent wasn’t hearsay, it was real. He grew-up live on television and there exists all the evidence in the world for why his ability is worth persevering with.

Even that doesn’t grant any sort of immunity, though. Football has become very literal, meaning that if an attacking player isn’t compiling a list of goals and assists, he becomes vulnerable. He becomes ‘bang average’ and ‘overrated’ – essentially, his worth starts being debated in the public forum, creating more noise that he has to learn to block out.

It characterises the challenge for someone like Mount. Or even for coaches overseeing the development of players like him. It’s a perform or perish world which isn’t necessarily always logical.

Mount did have a dip this season. Between October and – roughly – the middle of January, he struggled. He looked heavier in the legs and slightly blunt in the mind. He also suffered from the issues Chelsea experienced at the top of the pitch and the afflictions which kept repeating at Stamford Bridge, often against lesser opposition.

None of which was difficult to foresee or hard to fairly rationalise. The physical effect of a first Premier League season is well understood. That explains his slightly jaded quality, as does the recognition that he carries a heavy pressing responsibility as part of his role. Durability was always likely to be a factor.

Chelsea were also known to be an imperfect side. Lampard, for his many virtues, was also obviously a naïve, inexperienced coach. That should have excused – or at least mitigated - some of Mount’s difficulties. He’s quite an instinctive player. He likes to make runs into the penalty box, cut lines with his passing and be expressive with the ball at his feet. Needless to say, if the mechanics around him aren’t quite right, his opportunity to play a game that suits his abilities diminishes.

Conversely, when the team operates with more rhythm and cohesion, an orchestrating, playmaking type like him tends to become more influential – and, as testament, there was a response to that initial downturn. Actually, his performance against Everton, the last before the lockdown, was arguably his finest of the season. He was outstanding and that was a culmination of a short patch of form which was becoming increasingly noteworthy.

What emerges is a template of sorts; a set of truisms about this process which Lampard’s handling of Mount has helped to reinforce.

Young players need to fail. Part of their assimilation into senior elite football involves embedding into a team’s structure, that goes without saying, but their adaption also depends on being able to cope with the game’s cycle – its highs, its lows, the praise and the criticism.

That’s perhaps what Lampard has done well – where his strategy in relation to Mount has been most vindicated. There have been times this season when he would have been justified in leaving him out of the side. By resisting that urge, though, he has exposed him to the nature of Chelsea’s existence. And forced him to adapt around it. There will always be harsh environment at a club like that. There will always be inquests when games are lost or drawn. There are generally even complaints when they win.

It stands to reason, then, that a really important part of the conditioning process is to allow those experiences to occur. How else is it possible to raise a rounder player? The most productive move isn’t to protect him, or impulsively hide him from the spotlight, but rather to encourage him to develop the mental utilities to respond positively to a range of experiences, even the negative ones.

A football player is a person and, albeit it in their adjusted reality, coping with adversity is a life skill. Sometimes he has to stand in the rain.

It’s early. This is just the first cycle that Mason Mount has encountered at Chelsea and, because of the pandemic, even that didn’t have time to properly develop. But he survived his first minor dip in the Premier League and rebounded with a striking, eye-opening burst of form. That’s testament to the way he’s being coached, yes, but also a timely reminder of what young players must be allowed to have during their formative months.