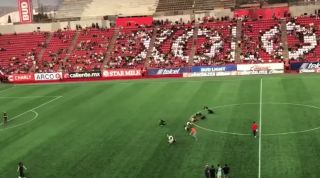 Xolos played out a 1-1 draw against Costa Rican side Herediano in a friendly on Saturday as they prepared for the continuation of the Liga MX season.

And at half-time, the Mexican club hosted a very special challenge specifically tailored around Neymar's antics against Mexico from the World Cup.

A group of courageous fans were tasked with rolling as far across the pitch as they could and as quickly as possible. For some, maintaining a straight line proved difficult.

After all the memes and all the ongoing jokes about the 26-year-old, it's great to see the incident has been brought to life tenfold.