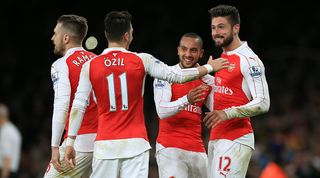 Arsenal’s second goal in Monday night’s 2-1 victory over Manchester City was a beautifully quick, ruthless attacking move that showcased a classic Mesut Ozil assist, and a confident Olivier Giroud finish. It highlighted their qualities excellently – and the position of the goal was also interesting.

It occurred in the inside-left channel, working the space on the outside of an opposition centre-back, rather than between the two. A notable feature of Giroud and Ozil’s play last night was that tendency to move laterally, to vary their position and collect the ball in the channels. Giroud has improved in many ways over the past three years – particularly in terms of finishing – but his movement has been one of the most important, if subtle, ways he’s brought more to his game.

Giroud arrived at Arsenal on the back of an excellent final season at Montpellier, where he hit 21 goals in a hugely unlikely Ligue 1 title triumph. His game was simple: he was the classic No.9 who excelled with his back to goal and scored from plenty of crosses, often with near-post runs. Those features have been obvious since his switch to Arsenal in 2012.

In his early Premier League days, Giroud was cast as the type of striker Arsenal haven’t usually had – an immobile penalty box prowler, rather than someone based around pace. This was true, but playing with such a different type of striker was occasionally problematic for the north Londoners, who were used to playing a forward like Thierry Henry or Robin van Persie who were capable of stretching sides, making quick darts into the channels and creating space between the lines.

Giroud, whose lack of pace is clearly his biggest weakness, wasn’t so keen to make these runs. But gradually, in a less spectacular manner, his movement has improved.

One of the most notable things from his performance against City was the fact he often received passes out on the left wing, often positioning himself up against former team-mate Bacary Sagna to battle aerially against a shorter player. From that zone, he could combine with Theo Walcott, who wanted to move inside into a centre-forward position, or knock the ball down to Ozil.

It’s very different from Giroud’s game during his first season at Arsenal. Take the home match against QPR that season, a narrow 1-0 win, and Giroud is continually receiving passes between the width of the penalty boxes, never out wide. He’s become much less predictable with his positioning.

Giroud was also impressive in an aerial sense against City, winning seven of eight aerial duels. His pass-completion rate wasn’t particularly good, but as many of these passes were knock-downs and flick-ons from longer passes, he actually did reasonably well to retain possession.

Giroud’s movement in this sense works particularly well playing just ahead of Ozil, a playmaker who specialises at moving laterally to space in wider areas. Relatively few of Ozil’s assists take place from a position between the two centre-backs and central midfielders – he usually drifts into pockets of space in slightly wider areas, before angling passes between opposition defenders.

He’s usually worked best when playing behind a mobile striker who is on the same wavelength – like Gonzalo Higuain at Real Madrid – who is looking to occupy similar positions. Ozil’s assists, for Walcott and then Giroud, are typical of the German’s game.

Giroud and Ozil have started to work properly as a partnership – and because both like drawing wide before teeing up a team-mate, it helps that Aaron Ramsey has returned to a central midfield role where he can make powerful runs to get in advance of these two, providing another dimension to the attacks and helping Arsenal play quick triangles.

Giroud still isn’t the complete striker, but he’s improving all the time. Whereas his lack of pace was once a huge disadvantage, he’s now compensating for that weakness with more intelligent movement, keeping opposition defenders guessing and dragging them out of position. Combined with ruthless finishing, he’s become of the Premier League’s most dangerous strikers.

RECOMMENDED How Mertesacker is flourishing: 5 things from Arsenal 2-1 Man City