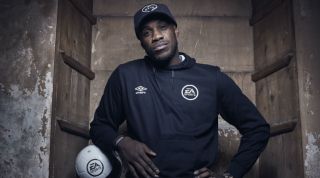 Michail Antonio is a happy man. And who can blame him? After four months sidelined and a bright return as one of West Ham’s best players since, things are looking up for the 27-year-old south Londoner.

Last season, not even a campaign of being shunted around Slaven Bilic’s starting lineup stopped him from getting an England call-up under Gareth Southgate, two days after he’d assisted all three goals in a 3-0 win over Crystal Palace.

A hamstring twang denied Antonio a first cap he’d been patiently waiting for, however – and after two Premier League appearances back, it ended his season completely.

Now, though, FFT is meeting a grinning Antonio full of optimism for the season ahead. We’ve been here before; first last summer, when the Hammers wideman invited us around for a cuppa to chat international frustrations and more, then again a few months later at West Ham’s training ground, when he jigged around in bubbles for a sprightly magazine photoshoot.

This time we’re in bearded Shoreditch at the UK launch of FIFA 18 – and Antonio is early. We should have known: things had been looking up for FFT ever since we saw Wycombe strongman Adebayo Akinfenwa arm-wrestling with a child upon our arrival.

“If Akinfenwa is 99 for physical strength in FIFA, then I should be 99 too,” Antonio grins, turning to address the camera. “I’m stronger than Akinfenwa. Where he is? I want him here now. Shoulder-to-shoulder barge… we’ll do this.”

With Antonio suitably warmed up by his macho musings, we turn attentions to West Ham’s season – and what lies ahead for their ambitious winger after his summer of strain.

“I was out for four months. It’s a very lonely experience – you see all of the boys out there training while you’re there looking at the window watching them enjoying their football,” he tells FFT.

“You’re there stuck in the gym just trying to get yourself right. Pre-season was literally just about making my hamstring as strong as possible, making sure it can tolerate strain, and making sure it doesn’t recur.

“Every footballer enjoys playing football – it’s not just a job, it’s also our hobby. So when you get injured it’s taken away from you… and it is a struggle.”

Also tough is trying to stay in Slaven Bilic’s good books now he’s back in the side – even if it means calling out the Croatian when unpopular decisions are made.

“When I wasn’t in the team he spoke to me... but now I'm in the team we talk more,” Antonio says, smiling. “Obviously every player wants to play, so if you’re not playing then you’re not going out of your way to speak to the gaffer. But now I’m playing I’m happy, and I’ll go over to have a bit of banter with him.

“He takes it well, and I do like to throw a lot around with him. For example: there was something that got taken off our pre-match menu for what we’re allowed to eat – I’m not going to say what it was – and I’ve gone up to him and said: ‘Where is this thing at?!’

“He was like: ‘It’s off for a reason Mike.’ I tried to tell him that we were winning when it was there, but then he just asked me where my goals had gone. ‘They’re where that thing you’ve taken off has gone…’”

It’s so far, so good under Bilic for Antonio this season, however. Although he only managed 72 minutes of football with the under-23s before he was thrown back in against Southampton, the 27-year-old eventually put in a man-of-the-match performance against Huddersfield in West Ham’s first Premier League win of the season.

So far there’s been no playing at right-back either – sweet music for Antonio, with another England call-up to target in the near future.

“Now I’m back, and back on the wing,” he asserts. “I’m looking stronger and faster, but the next thing I need to do is score a goal. Probably on Saturday...”

There's a glint in his eye. Everything is said with a smile for Antonio, which is perhaps why it feels genuine when he insists that last season’s position-switching didn’t faze him. That’s not the case for everyone – take his departed team-mate Robert Snodgrass for example, who criticised Bilic for asking him where he wanted to play, and often fielded the Scot in unfamiliar surroundings.

“Sometimes you play your whole career in one position, get moved and it is difficult,” Antonio says. “But as a professional you just have to adapt as best as you can.

“Obviously you get into a routine of doing the exact same things, and when you’re playing the same position you know what you’re going to do in certain situations. If you get moved, it throws things out of shape. So yes, it is difficult to move around but you’ve got to adapt – you can’t blame the tools.

“In the last two years I’ve been moved around a lot and still managed to get an England call-up, so I’m not going to complain about it. I’m still getting recognition as a winger, even though I’ve been played at right-back, or on the left.”

Antonio’s return has also coincided with that of Andy Carroll, who is slowly being unrolled from the bubble wrap to be deployed more regularly in the Premier League.

The goals have hardly flowed for West Ham this season – just four in their first five matches – and while Carroll is yet to register after his latest lay-off, Antonio is in no doubt that the 6ft 4in battering ram is a player he wants to be alongside.

“I do like to have a big man to play with, because once I’m near the D I’m not thinking about it – I’m putting that ball in the box,” says the wideman. “When you’ve got someone smaller in the box you’ve got to think and look up where he is. But with Andy I don’t need to even look – I can just hang it to the back stick and the majority of times I know he’s going to be there.

“When he’s not in the team it’s just about looking more; you’ve got to take that second to see where your frontman is and try to find him, instead of just getting it in there.”

And what better game for the pair to open their accounts for the season than on Saturday against Tottenham at the London Stadium? Last season the Hammers effectively ended Spurs’ title challenge with a memorable 1-0 win there, following a turbulent season of struggle in their new home.

Spurs, of course, know the feeling: their Wembley travails have been well-told this season, but Mauricio Pochettino’s team have won both of their Premier League away matches so far this season. From someone who knows what it’s like, then, why does a new stadium bring with it such problems?

“I definitely believe it’s a thing,” Antonio tells FFT. “You saw it when Arsenal moved to the Emirates, when we moved to the London Stadium, and now Spurs.

“But the problem is with them moving to Wembley is that it’s Wembley. Teams going there know they’re playing at such a massive, historic ground and it’s going to lift players who go there. That’s why they’re doing better away than at home.

“Honestly, though, I couldn’t tell you why players are affected by new grounds. It just... happens.”

Antonio & Co. will get to test that theory sooner than expected, having been drawn to face Tottenham at Wembley in the fourth round of the League Cup on October 24.

But first there’s that opening Premier League goal to get...

Michail Antonio was speaking at the launch of EA SPORTS FIFA 18, released on September 29 on PlayStation 4, Xbox One and all other platforms. To pre-order your Deluxe Edition, head here.