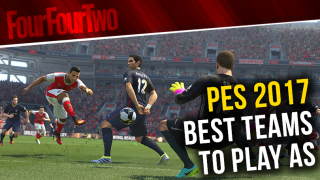 When faced with a choice that includes Sansagiulo, Maseadeira and Lancashire Claret, you might think you’d be staring at the wine list in the Burnley branch of Pizza Express. But as you’ve probably guessed from the headline, they’re actually just three of the made-up team names on the latest version of Pro Evolution Soccer.

With only a few official licences sprinkled around the leagues picking a team to play as can be a bit of pain as you try to work out who’s who. So we’ve done the hard work for you, picking out the best licensed teams to take charge of and selecting those with made-up monikers that represent a particularly PES-friendly challenge.

1. Score a hatful with Liverpool

You only have to watch Liverpool’s game against Leicester recently for a perfect microcosm of Klopp’s team: thrilling going forward but prone to the odd defensive calamity that threatens to spoil everything. A bit like PES 2017, then. It’s a game that’s always loved goals, and while the keepers don’t gift you so many these days, the through-balls are still laser guided, the shooting feels meaty, and its Player ID system really emphasises an individual’s talents, so Klopp’s rampaging Liverpool side have bags of potential. Whether it’s with the relentless Mane, the elegant Lallana or the often majestic Coutinho, the reds have got plenty of attacking options to exploit.

2. Try to cope post-Zlatan with PSG

Shouldn’t be too hard for a team who had the 2016 title wrapped up quicker than you can say “Zlatan doesn’t do auditions”, right? But you’d be hard-pressed to convince most people that PSG have adequately replaced the enigmatic striker. Cavani doesn’t score in the same numbers he used to but perhaps the free-scoring Swede’s departure will allow the ex-Napoli man to step up. The arrival of Jese from Real Madrid gives you further options upfront and the trickery of Ben Arfa on the wing should lead to plenty of chances being created. As one of the only fully licensed leagues in the game, defending a Zlatan-less PSG’s Ligue 1 title is a good place to start for anyone converting from FIFA for the first time.

El Cholo’s Atletico (one of just two teams licensed from La Liga) have been on the verge of Champions League success twice in the past three seasons, narrowly losing out both times to their crosstown neighbours. Less spirited sides might’ve seen their stars picked off by wealthier rivals but Atleti have only added to their attacking threat in the shape of Kevin Gameiro and Nico Gaitan. The star names in the team’s formidable defence might be getting on a bit, but with Koke making things happen from midfield, Saul able to unlock defences in the blink of an eye and Antoine Griezmann in the form of his life, can you make it third time lucky in Europe for Los Rojiblancos?

Alternatively: Leicester aren’t the only team making their Champions League debut this season, so are some team called East Midlands. Fortunately they have their own Jamie Vardy.

4. Tweak your tactics with Man City (aka Man Blue)

PES offers plenty of freedom when it comes to how your team lines up, allowing you to select different formations for each phase of play. During the game you can easily make changes using the D-pad, implementing preset tactics or simply pushing up your defensive line. So who better to experiment with than Pep Guardiola’s Manchester City (or Man Blue in PES speak). Put the full-backs in midfield when you’re in possession, have the goalkeeper play as a false 6, or get Aguero to drop back and start the attacks from the edge of his box. Just beware: navigating the Advanced Settings menus is like deciphering code.

5. Revive a sleeping giant with Ajax

The crippled superpower of Dutch football, Ajax have been dethroned by PSV in recent years, while Feyenoord have set the early pace this season. But with the Eredivisie one of only two fully licensed top-flight European leagues in the game, you might as well have a bash at it, and restoring Ajax to their perch is not an unreasonable challenge. The days of Bergkamp, Davids, Overmars et al might be over but with players such as Anwar El Ghazi, Riechedly Bazoer and summer signing Hakim Ziyech, the club isn’t short of exciting young talent to help you guide them back to glory.

Klopp, Hummels, Gundogan and Mkhitaryan might be gone but Thomas Tuchel’s Dortmund are still one of the most exciting teams in Europe, with young Julian Weigl shaping up to be the heartbeat of the new-look side and Marc Bartra swapping Barca for BVB. But it’s further up the pitch where Dortmund offer the most thrills. Mario Gotze is back where he belongs after stalling at Bayern (who are completely absent from the game), while Andre Schurrle adds experience, but both are arguably outshone by the exciting Ousmane Dembele out wide. That’s not to mention Marco Reus, who despite being on the front of the FIFA box, is still a joy to run at defenders with.

7. Win four in a row with Sevilla (aka AN White Red)

Despite holding the official Europa League licence PES finds itself in the absurd position of not being able to say the same for the competition’s current holders. Sevilla have made the Europa League their own in recent years, winning it three times in a row, but with primary goal-getter Kevin Gameiro departing for Diego Simeone’s Atletico and Unai Emery now in charge at PSG, taking midfield enforcer Grzegorz Krychowiak with him, can former next-big-thing Ganso, Wissam Ben Yedder and on-loan Samir Nasri help you win them an historic fourth trophy in a row?

Alternatively: Attempt to topple the men from Andalucia with Man Utd (aka Man Red). If you can’t do it with that squad, maybe football games just aren’t for you.

Whatever you think of China’s rise to footballing demi-power it’s impossible to ignore. PES doesn’t have the entire Chinese Super League but with an official licence for the Asian Champions League, three of the biggest teams are included: Big Phil’s reigning domestic champions Guangzhou Evergrande (where Jackson Martinez now plies his trade), Sven Goran Eriksson's Shanghai SIPG (home to Hulk) and our pick Jiangsu Suning, who somehow managed to convince Shakhtar’s Brazilian star Alex Teixeira to sign for them over Liverpool. Chances are it wasn’t the opportunity to play alongside former Man City striker Jo. Still, their squad also boasts ex-Chelsea midfielder Ramires and the wonderfully named Socceroo, Trent Sainsbury. That should be more than enough to challenge for the trophy.

9. Win a Superclasico with Boca Juniors

As derbies go, Argentina’s Superclasico between Boca and River Plate is about as tasty as they come. Argentina’s Primera División appears in full on PES 2017 and that includes Boca’s legendary Bombonera stadium. While it doesn’t have the Sky Sports sheen of FIFA, Pro Evo’s grounds are particularly well recreated, especially the crowds, so the pulsating Bombonera looks great. Tevez is the undoubted talisman of the team but he doesn’t carry them; he’s got support in Walter Bou and Fernando Zuqui. Best of all, unless you’ve really annoyed your neighbours, playing it virtually means you shouldn’t have to employ Police holding perspex shields as protection from rival fans’ missiles.

10. Conquer the world with Barcelona

In case the fact that they’re plastered all over the box, menus and marketing wasn’t enough to give it away, Konami has signed a deal with Barca that means PES 2017 is the only place you can play pixelated football at the Nou Camp. Some would argue it doesn’t really make up for calling Wigan LN Azure Blue and White and Bournemouth East Dorsetshire but let’s not get into all that again. The fact remains that Barcelona have the world’s most terrifying strike force (even scarier than the famously flammable Will Grigg) and a squad sprinkled with future legends of the game. Taking control of them might lack a little imagination but if you’re going to do it on any game it might as well be Pro Evo.

11. Go a step further with Wales

After FFT predicted Wales’ inspirational run at the Euros (well, almost) try to go a couple of steps further than Chris Coleman’s men managed in France and win a European Cup with the Dragons. There’s only one problem: Wales are very much not a licensed team in PES 2017. The names don’t quite hark back to the days of Roberto Larcos or Naldarinho, but you’ll be pinning your hopes on a fella called K. Lynch, who just so happens to have spookily similar stats to one Gareth Bale. Of course, Bale appears elsewhere in the Real Madr..., sorry, MD White squad, so you can easily dive into the game’s edit mode and fill the national side with the right players, most of whom can be called up from their correct clubs.

12. Give Gabriel Jesus a winning send-off with Palmeiras

With Manchester-bound striker Gabriel Jesus only at Palmerias until January you better make the most of his pace and finishing ability before he packs his bags for drizzlier climes. While none of the rest of the squad is likely to command such a big-money move, the pretender to Aguero’s throne isn’t the only one in the team who can play. Diminutive winger Dudu picks up assists for fun, while Erik causes problems of his own on the other flank, with the lightly capped Jean (presumably named after somebody’s nan) running the midfield.

13. Discover the next big thing with FC Porto (aka DL Blue White)

Porto’s record of discovering and nurturing talent before selling it off for huge sums is unrivalled in football. For every Mangala there’s a Falcao (the Atletico version) so chances are there’s a player in their current squad that’ll command a big fee before too long. The smart money’s on it being midfielder Ruben Neves who went straight into the first-team squad aged just 17. His stats are fairly modest here, but with on-loan Oliver Torres joining him in midfield and Jesus Corona out wide, they’re well placed for a return to the top, having lost ground to Benfica and Sporting in recent years. Perhaps they should stop selling all their best players.