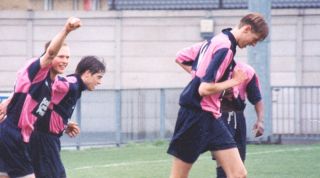 "The ball was kicked out of play and settled close to where I was, behind the railings. I picked it up and was about to toss it back when I was startled by this giant of a figure leaning on the fence, waiting to take the throw. He absolutely towered over me."

Peter Crouch is a tall man. And, as Dulwich Hamlet fan Jack McInroy found in 2000, he was a tall teenager. Crouch had joined the Isthmian Premier side, one tier below the Conference, on loan from Tottenham and immediately terrorised non-league defences and the low bridges of south London.

But despite the 6ft+ between them, Crouch's brain and feet had a great connection. "You could see he was an intelligent player," says Richard Watts, a Dulwich Hamlet supporter of 35 years' standing. "As soon as he got the ball, he knew what he wanted to do with it. And he had a very good first touch." It's almost as if the gigantic Crouch had a good touch for... for... damn, what’s that phrase?

It didn't seem, however, like it would be good enough. After scoring on debut against Billericay Town, Crouch didn't find the net again. "He found it easier scoring goals for England than for Dulwich!" laughs John Lawrence, programme editor for four decades. While his future strike partner, Jermain Defoe, was becoming a folk hero at Bournemouth, Crouch was failing to impress three divisions below that.

"We thought he could do a decent job for us but would never make it at Spurs," recalls Watts. "He looked like he might be a Conference player, or third or fourth division at best."

Unsurprisingly, Crouch's physique was a problem. In football, especially non-league football, height means nothing without strength. As the striker himself would later say, he was "getting battered every week".

"He looked lightweight. Imagine him now, but two stone lighter," says Watts. "His tall, thin physique was even more exaggerated than it is now. He really did look like a praying mantis."

A praying mantis can jump. Crouch managed to be over 6ft standing and under 5ft in the air. Paul Griffin notes: "As Dulwich fans, every time we saw him somewhere else – especially Villa – where they'd pump balls into him from the air, we'd say 'No, no, he's no good in the air.'"

Crouch took the long route from Dulwich to Aston Villa in the Premier League, via the Swedish third division, QPR and Portsmouth. But he did make it in the end, unlike the man he replaced, however temporarily, at Champion Hill.

Tottenham had signed forward Dave McEwen from Dulwich Hamlet not long before, and under no obligation to pay the club any money, gave them Crouch on loan to say thanks. "We thought McEwen was a great prospect, but he played about two matches for Spurs," says Watts. "I remember seeing him on Match of the Day: he came on as a sub and missed a sitter. His professional career fizzled out after that."

Meanwhile Crouch, allegedly nicknamed 'the 20ft chicken' by one set of non-league fans, saw his career take flight shortly after, playing in two World Cups with England and a Champions League final with Liverpool, having also turned out for Portsmouth and Southampton in the top flight. Not bad for a giant rooster.