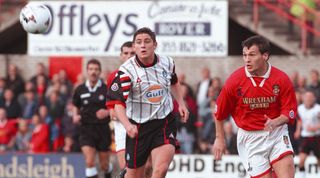 It is a truth universally acknowledged that however hard he works, however many goals he scores and however many records he breaks, Frank Lampard Jnr will forever be known to some detractors as 'Fat Frank'.

It isn't big and it certainly isn't clever but the nickname has stuck, especially among West Ham fans peeved by his 2001 departure to Chelsea, due to the puppy fat he had as a youngster – including as a 17-year-old on loan at Swansea.

"I would never have thought he'd turn out to be the player he was – sorry, the player he is now," says former Swans team-mate Christian Edwards, rapidly correcting himself. "He'd admit he was probably a little bit overweight at that age, and that he’d always get the ball onto his right foot instead of passing with his left."

"You can see, 18 years on, that he's matured in physicality," adds striker Steve Torpey, now assistant manager at York City.

But 'Probably A Little Bit Overweight Frank' was a class above, even at 17. Arriving in south Wales in October 1995 as the little-known son of Hammers legend Frank Lampard Snr, he slotted straight into Swansea's midfield and immediately improved their game with his astute passing.

Younger readers should realise the Swansea City of 1995 wasn't the Swansea City of today. Instead of the ultra-modern Liberty Stadium you had the Vetch Field, subject to rustic nostalgia but now in its element as a vegetable patch. Instead of continental flair, you had British cloggers. And instead of attractive passing you had whiplash from watching the ball fly over your head.

"The team was generally quite poor," muses supporter David Brock. "[Lampard] was something we didn't have: a midfielder who looked up before he passed it. Once he left, we stopped passing the ball around – we were too busy lumping it out of defence.

"In recent years we've come to expect good football, but in the lower leagues most of our fans liked people who'd get stuck in. He wasn't so concerned about that; he wanted to play football. Some people said he wasn't strong enough. I think they expected too much of him, coming from a big club. He won them over, though."

Fans and team-mates alike knew they were onto a good thing with Lampard. "We tried to keep him longer, but that was never going to be an option," says Edwards.

Lampard himself wasn't keen. In his 2006 autobiography – where he also admits, "I didn't even know where Swansea was; I had to get a map out" – he writes: "Swansea's training ground was a bit grotty and I was shocked at the lack of facilities, never mind the difference in the way they played... they knew I didn't want to stay another month. We won about two games and there were only a couple of thousand fans there watching us struggle to avoid relegation."

But perhaps that was the point. Lampard protested to Uncle 'Arry, West Ham manager, about being sent down the M4 but later appreciated the learning curve. "If he didn't enjoy it," adds Edwards, "I can see why. It was very sparse and very basic. Maybe the loan was to say to Frank, 'If you don't apply yourself, this is where you could end up'."

Wales can have that effect on people. Lampard certainly wouldn't want a reunion with the man who collared him in a pub and growled, "Why don't you f*** off back to London, you cockney bastard?" Torpey laughs. "He was probably a Cardiff supporter."

Of course, Lampard did apply himself. Champions League winner, Chelsea's all-time top scorer and a century of England caps. Who are you calling fat?