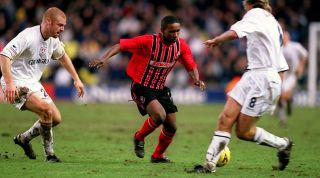 When Defoe joined Bournemouth from West Ham in 2000/01, hopes weren't especially high. Steve Fletcher, who spent 20 years with the club, recalls: "I'll be honest: he didn't stand out in training. In his first game, he scored a header and I thought, 'Yeah, that's not bad, but he's only all right.'"

But Sean O'Driscoll, in his first managerial season, had seen something he liked. "Jermain inspired the easiest half-time team talk I've ever given," the man who later managed Doncaster and Nottingham Forest, tells FourFourTwo.

"He'd been with us 24 hours when we were away at Stoke, and in the first half he hit the post and scored a goal. He was an absolute handful. I walked into the dressing room and just said, 'Give him the ball'."

"The team talk was all devoted to that," confirms midfielder Richard Hughes, who played with Defoe at both Bournemouth and Portsmouth. "It had taken Sean 45 minutes to realise he was too good for our opponents."

Eight matches later, Defoe had added another 10 goals to his tally and was one match and one goal away from breaking a post-war record by scoring in 10 consecutive league games – his first 10 league games. It hadn't all been a piece of the proverbial. "We were getting beat 2-1 by Luton, when Jermain was eight games into his run, and we got a penalty in the 83rd minute,” remembers Hughes.

“I was on penalties and the Luton goalkeeper, the late Mark Overdale, was a former team-mate so I knew what he would do. Then Jermain tried to grab the ball off me, saying, 'Please, please, I want that record'. I said, 'I couldn't care less about your record – we're 2-1 down with seven minutes to go!' He wasn't happy but I pulled rank... then Jermain scored the winner in the last minute."

Things went Defoe's way in that New Year's Day game but in the 10th match, hosting Cambridge, fate conspired against him. More precisely, Wade Elliott's elbow conspired against him. With Bournemouth down to 10 men after half an hour thanks to Elliott's rush of blood to John Dreyer's head, Defoe was moved to the wing – as unnatural for the young striker then as it would be now.

"Sean O'Driscoll said to Jermain, 'Look, I know you're going to be upset but you'll have to sacrifice this personal achievement for the team and play out wide,'" remembers Fletcher.

And still the chance came. "It was a great ball from Carl Fletcher and I saw the keeper come out," said Defoe afterwards. Did the record affect his clinical thinking? Given that 10 years later he'd nervously miss several chances to score his 100th Premier League goal while wearing a T-shirt prematurely celebrating the milestone, what do you think?

"I was going to dink it over him," Defoe explained, "but the record was on my mind. I thought, 'No, I'm going to make sure'. So I went round him. I didn't look at the goal – I just got my head down and pinged it."

Fortunately, the ball found its home. Defoe had broken the record. Or had he? Claims emerged that others had already scored in 10 consecutive league matches – specifically, Southampton's Ron Davies and Billy McAdams of Manchester City. "I'm not sure what's happening," Defoe confessed at the time.

No matter. The 18-year-old didn't go on to break Dixie Dean's record of scoring in 12 straight games or Pele's of 16 but he continued to shine. Defoe T-shirts were sold; supporters chanted 'Who let Defoe out?' (answer: Harry Redknapp). "You could almost guarantee he'd score," chuckles Cherries fan Alan Levy. "We'd already had Rio Ferdinand at Bournemouth. It helps having your old manager at a Premier League team."

"He'd score ridiculous goals in training and lads would applaud – I haven't seen that [again] in a 25-year career," says Fletcher about Defoe, not Rio Ferdinand. "His goal at Oxford left us apologising to the opposition bench," reminisces O'Driscoll. "He was running away from goal and you thought he was going to recycle the ball when he swivelled and chipped the keeper from a tight angle."

Defoe was paired with targetman Fletcher up front. "They thrived together; Fletcher acted as a protector for him on the pitch," says O'Driscoll. Fletcher laughs. "With Jermain running at big, hard centre-halves and scoring goals like they were going out of fashion, he annoyed a few people. They wanted to kick 10 bells of crap out of him. Being a big lad, I looked after him."

Fletcher benefited from the loan as much as Defoe. "You're only as good as your partner. I'd made a career out of my aerial presence, flicking the ball on, and with Jermain sticking it in the back of the net I received accolades as well. Sometimes I'd win a header and he'd take it down, beat two players and stick it in the top corner from 25 yards – and I could claim an assist!"

It wasn't all smiles. "On one away trip Jermain, being naïve, left his room key with someone," Fletcher reveals. "We trashed it - not too badly, just ripped the covers off, a bit of tea and sugar on the bed. He wasn't a happy bunny. I put an arm around him and said it was just banter."

And during his incredible run, Defoe did fail to score in one game: at home to Dover Athletic in the LDV Vans Trophy. Rubbish, really.