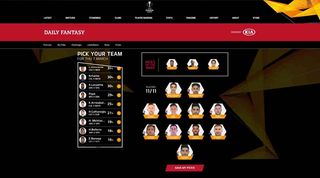 We all know how it goes – you spend ages picking your fantasy team in pre-season, checking stats, reading expert advice and getting excited about the clever choices you don’t think anyone else has spotted.

Four weeks later you’ve forgotten to make your transfers, accidentally picked Phil Jones as your triple captain and everything has gone to pot. Maybe next season, eh?

The premise is simple: rather than picking a team you’ll forget about over a longer period of time, you create a matchday-specific side of 11 players – any you like – from the clubs in action that evening. Your captain will score double the points.

With this season’s edition of the tournament now at the semi-finals stage, it's the perfect time to prove your knowledge and get stuck into Daily Fantasy – the top 10 winners will earn themselves €135 UEFA online store vouchers.

Your team will expire at the end of each matchday, but then you can pick a new one for the next game – easy.

Players can earn points in the usual ways: by appearing, scoring, assisting a goal, keeping a clean sheet and more – and lose them by picking up cards, netting at the wrong end and more (full scoring can be found here).

You can also challenge your mates, too, and find out who really knows their stuff best.

Why not give it a try? Arsenal, Chelsea, Eintracht Frankfurt and Valencia players will all be available for selection in the semi-finals. It’s just one more way that Kia is helping fans enjoy another thrilling Europa League campaign this season.

Kia empowers fans, players and clubs via the Europa League