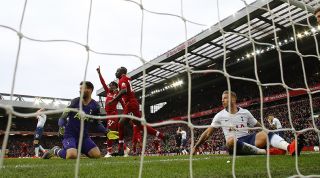 In the end, both accepted the blame for defeat. It was Hugo Lloris’s late blunder which ultimately helped gift Liverpool the win that could end up deciding the Premier League title race – but before that, Moussa Sissoko could and should have given Spurs the lead.

"I blame myself for this defeat," the midfielder sobbed post-match, echoed by his goalkeeper who noted solemnly: "When you are a goalkeeper, you know the responsibility. Of course you question yourself."

And so, from being just about in with a shot at the title just over five weeks ago, Tottenham are now 18 eye-popping points behind leaders Liverpool. It’s a cruel world.

Today, though, we’re celebrating French success rather than condemning the cock-ups. We’re after the 50 Bleus stars with the most appearances in Premier League history, and giving you 10 minutes to name as many as you can.

Ten minutes are on the clock, and then we’d like you to tell us how you did on Twitter @FourFourTwo – send us proof, but don’t give answers away to everyone else now...

LIST The 10 best Arsenal players of the Premier League era